This Is a Portrait If I Say So Identity in American Art, 1912 to Today 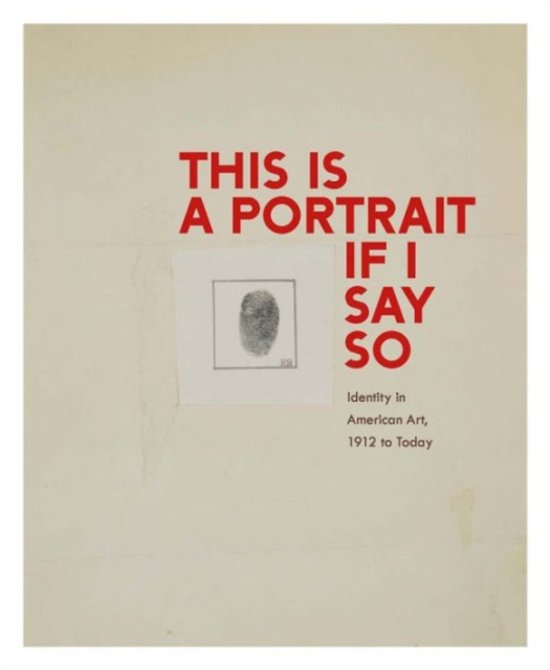 This groundbreaking book traces the history of portraiture as a site of radical artistic experimentation, as it shifted from a genre based on mimesis to one stressing instead conceptual and symbolic associations between artist and subject. Featuring over 100 color illustrations of works by artists from Charles Demuth, Marcel Duchamp, Marsden Hartley, and Georgia O’Keeffe to Janine Antoni, Felix Gonzalez-Torres, Roni Horn, Jasper Johns, and Glenn Ligon, this timely publication probes the ways we think about and picture the self and others. With particular focus on three periods during which non-mimetic portraiture flourished—1912–25, 1961–70, and 1990–the present—the authors investigate issues related to technology, sexuality, artist networks, identity politics, and social media, and explore the emergence of new models for the visual representation of identity.

Taking its title from a 1961 work by Robert Rauschenberg—a telegram that stated, “This is a portrait of Iris Clert if I say so”—this book unites paintings, sculpture, photography, and text portraits that challenge the genre in significant, often playful ways and question the convention, as well as the limits, of traditional portrayal.
Toon meer Toon minder

In a time when identity, politics, and technology are so prevalent in our daily lives, This is a Portrait If I Say So reveals a new narrative of the progression of portraiture in American art. -Mackenzie Salisbury, ARLIS/NA Reviews -- Mackenzie Salisbury * ARLIS/NA Reviews * [This] book explores how different artists investigate the meaning of identity through a range of issues, from sexuality and technology to race and politics . . . [to] reveal both the expansiveness and the diversity within the genre of American portraiture. -The Magazine Antiques * The Magazine Antiques * Given the scholarly attention devoted to portraiture in recent years, and the growing number of major exhibitions that look at the genre, This Is a Portrait If I Say So is a timely intervention. One of its great strengths is the absolutely fascinating and unusual array of portraits chosen for examination. -Shearer West, University of Sheffield -- Shearer West While the rise of identity politics since the early 1990s has subjected ideas of the nature and representation of identity to scrutiny, there has been no single publication that focuses on artists' development of radical alternative strategies in portraiture. The authors of This Is a Portrait If I Say So are to be applauded for addressing this important and neglected subject, and for the original and significant questions that their project raises. -Paul Moorhouse, National Portrait Gallery, London -- Paul Moorhouse
Toon meer Toon minder