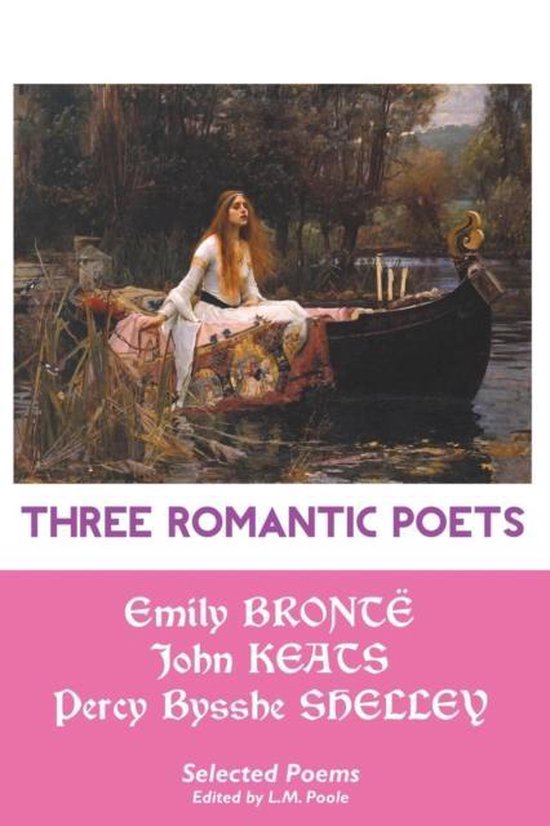 THREE ROMANTIC POETS: EMILY BRONTE, JOHN KEATS, PERCY BYSSHE SHELLEY SELECTED POEMS Edited and introduced by L.M. Poole
Three great Romantics poets are featured in this anthology - Percy Bysshe Shelley, John Keats and Emily Bronte. The book includes all of their famous poems.
Emily Bronte as a poet is still neglected today. Her novel Wuthering Heights, however, remains one of the great English novels. It continues to sell, continues to be adapted for radio, theatre, film and television, continues to inspire readers and be cited by critics.
The wind whistling through the heather in Winter is indeed the atmosphere of Wuthering Heights, and also of Bronte's poetry. In poem after poem we find loving evocations of the moors: we hear of 'the breezy moor' (in "The starry night shall tidings bring"), the 'flowerless moors' (in "How still, how happy Those are words"), and of 'the moors where the linnet was trilling/ Its song on the old granite stone' (in "Loud without the wind was roaring," the most powerful of Bronte's moor-poems).
John Keats is one of the few British poets who is truly ecstatic andwild. Despite the overly-ornate language, the often awkwardphrases ('made sweet moan' in 'La Belle Dame Sans Merci'), despite the Romantic indulgences and the sometimes chauvinist views, theoften over-simplification of natural and human processes andexperiences, and despite the tendency to gush and exaggerate, Keats is one of the few poets who write in English who is truly furious and shamanic.
This book gathers the most potent passages from John Keats together, including the famous 'Odes', the sonnets, the luxuriously sensuous 'Eve of St Agnes', the mysterious and atmospheric 'La Belle Dame Sans Merci', and extracts from 'Lamia', Endymion and Hyperion.
Percy Shelley is one of the major British poets, seen by many people as the breathless, hyper-lyrical, angelic yet anarchic poet of the Romantic era, out-doing Lord Byron and John Keats in terms of sheer brilliance. His personality, as with Keats and Byron, is a crucial component in the Shelley legend. Shelley has a cult built up around him.
The book includes a selection of Shelley's odes, hymns and paeans of England's breathless, angelic, anarchic poet. Famous poems, such as 'Ode to the West Wind' and 'The Cloud', are set beside extracts from Prometheus Unbound and Epipsychidion. With an introduction and bibliography for each poet. Plus a portrait gallery for each poet. www.crmoon.com."
Toon meer Toon minder