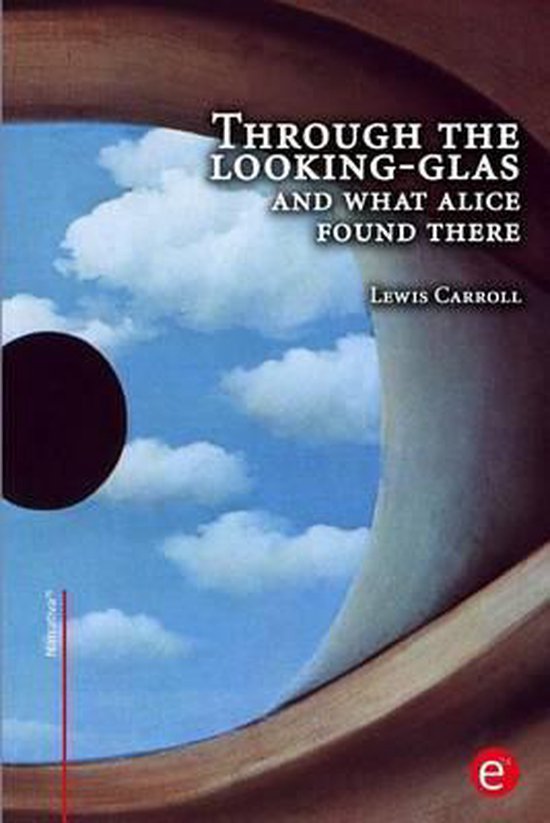 Alice is playing with a white kitten (whom she calls ''Snowdrop'') and a black kitten (whom she calls ''Kitty'')—the offspring of Dinah, Alice's cat in Alice's Adventures in Wonderland—when she ponders what the world is like on the other side of a mirror's reflection. Climbing up on the fireplace mantel, she pokes at the wall-hung mirror behind the fireplace and discovers, to her surprise, that she is able to step through it to an alternative world. In this reflected version of her own house, she finds a book with looking-glass poetry, ''Jabberwocky'', whose reversed printing she can read only by holding it up to the mirror. She also observes that the chess pieces have come to life, though they remain small enough for her to pick up. Upon leaving the house (where it had been a cold, snowy night), she enters a sunny spring garden where the flowers have the power of human speech; they perceive Alice as being a ''flower that can move about.'' Elsewhere in the garden, Alice meets the Red Queen, who is now human-sized, and who impresses Alice with her ability to run at breathtaking speeds. This is a reference to the chess rule that queens are able to move any number of vacant squares at once, in any direction, which makes them the most ''agile'' of pieces. The Red Queen reveals to Alice that the entire countryside is laid out in squares, like a gigantic chessboard, and offers to make Alice a queen if she can move all the way to the eighth rank/row in a chess match. This is a reference to the chess rule of Promotion. Alice is placed in the second rank as one of the White Queen's pawns, and begins her journey across the chessboard by boarding a train that literally jumps over the third row and directly into the fourth rank, thus acting on the rule that pawns can advance two spaces on their first move. Tenniel illustration of Tweedledum (centre) and Tweedledee (right) and Alice (left). 1871) Red King snoring, by John Tenniel She then meets the fat twin brothers Tweedledum and Tweedledee, whom she knows from the famous nursery rhyme. After reciting the long poem ''The Walrus and the Carpenter'', the Tweedles draw Alice's attention to the Red King—loudly snoring away under a nearby tree—and maliciously provoke her with idle philosophical banter that she exists only as an imaginary figure in the Red King's dreams (thereby implying that she will cease to exist the instant he wakes up). Finally, the brothers begin acting out their nursery-rhyme by suiting up for battle, only to be frightened away by an enormous crow, as the nursery rhyme about them predicts. Tenniel illustration of the White Knight. 1871 Alice next meets the White Queen, who is very absent-minded but boasts of (and demonstrates) her ability to remember future events before they have happened. Alice and the White Queen advance into the chessboard's fifth rank by crossing over a brook together, but at the very moment of the crossing, the Queen transforms into a talking Sheep in a small shop.
Toon meer Toon minder

Originele Titel
Through the Looking Glass