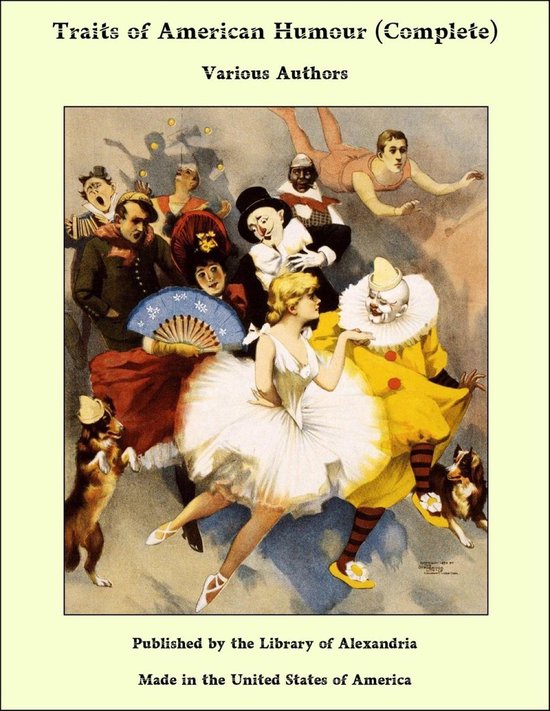 Most Europeans speak of America as they do of England, France, or Prussia, as one of the great countries of the world, but without reference to the fact that it covers a larger portion of the globe than all of them collectively. In like manner as the New England confederacy originally comprised the most enlightened and most powerful transatlantic provinces, and the inhabitants accidentally acquired the appellation of Yankees, so this term is very generally applied to all Americans, and is too often used as a national, instead of a provincial or a sectional soubriquet. In order to form an accurate estimate of the national humour, it is necessary to bear these two great popular errors constantly in view. The Eastern and Western, Northern and Southern States, though settled by a population speaking the same language, and enjoying the same institutions, are so distant from each other, and differ so widely in climate, soil, and productions, that they have but few features in common; while the people, from the same causes, as well as from habits, tastes, necessities, the sparseness or density of population, free soil, or slave labour, the intensity, absence, or weakness of religious enthusiasm, and many other peculiarities, are equally dissimilar. Hence, humour has a character as local as the boundaries of these civil subdivisions. The same diversity is observable in that of the English, Irish and Scotch, and in their mirthful sallies, the character of each race is plainly discernible. That of the English is at once manly and hearty, and, though embellished by fancy, not exaggerated; that of the Irish, extravagant, reckless, rollicking, and kind-hearted; while that of the Scotch is sly, cold, quaint, practical, and sarcastic. The population of the Middle States, in this particular, reminds a stranger of the English, that of the West resembles the Irish, and the Yankees bear a still stronger affinity to the Scotch. Among the Americans themselves these distinctions are not only well understood and defined, but are again subdivided so as to apply more particularly to the individual States. Each has a droll appellation, by which the character of its yeomanry, as composed of their ability, generosity, or manliness on the one hand, and craft, economy, or ignorance of the world, on the other, is known and illustrated. Thus, there are the Hoosiers of Indiana, the Suckers of Illinois, the pukes of Missouri, the buck-eyes of Ohio, the red-horses of Kentucky, the mud-heads of Tenessee, the wolverines of Michigan, the eels of New England, and the corn-crackers of Virginia. For the purpose of this work, however, it is perhaps sufficient merely to keep in view the two grand divisions of East and West, which, to a certain extent, may be said to embrace those spread geographically North and South, with which they insensibly blend. Of the former, New England and its neighbours are pre-eminent. The rigid discipline and cold, gloomy tenets of the Puritans required and enforced a grave demeanour, and an absence from all public and private amusements, while a sterile and ungrateful soil demanded all the industry, and required all the energy of the people to ensure a comfortable support. Similar causes produce a like result in Scotland. Hence the striking resemblance in the humour of the two people. But though the non-conformist fathers controlled and modified the mirth of the heart, they could not repress it. Nature is more powerful than conventional regulations, and it soon indemnified itself in the indulgence of a smile for the prohibition of unseemly laughter.