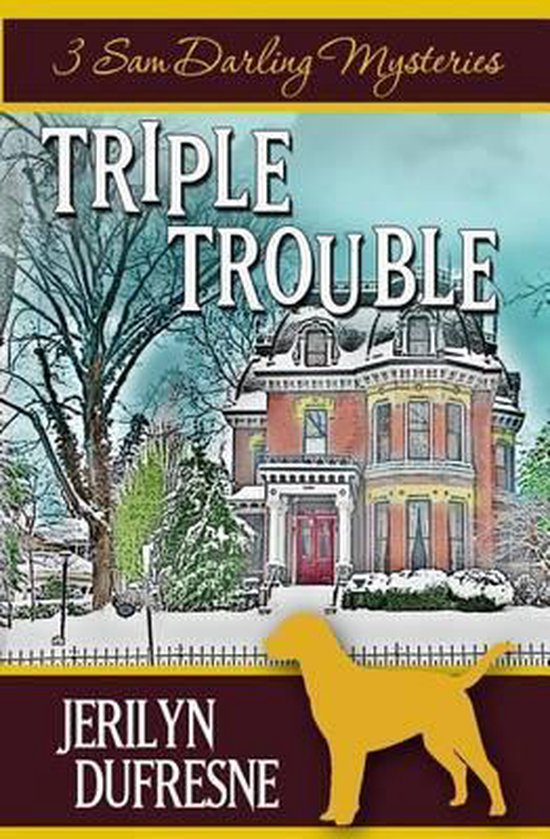 
Three Sam Darling mysteries in one big book, including a bonus short story! This fun cozy mystery series features amateur sleuth and social worker Samantha and her canine companion Clancy. Between her big family of five siblings, her charming hometown of Quincy, and a sudden run of murders, Sam has her work cut out for her. No one is asking her to investigate, but that doesn't stop her!


Moments after hiring Samantha Darling as a therapist, Dr. Burns is murdered. Stunned by his sudden death and desperate to keep the job she just got, Sam vows to find the killer.


She has two things going for her. The first is that her brother Rob is a cop, and she figures the crime-solving thing has to be genetic. The second is that Sam is a little bit psychic—so finding the culprit should be a snap for her. If only she could tell the difference between her psychic vibes and indigestion….


With the help of her landlord and her dog, Sam sets out to solve the murder. Along the way, she spends time with the hot new guy in town and tries not to spend time with the old high school boyfriend who stood her up on prom night.


When a man falls down at Samantha Darling's feet, she thinks it's pretty funny. But she stops joking when he turns up dead.


Sam is busy trying to unravel the mystery as the death toll keeps mounting. She's thrilled to be hired by the handsome local PI to work in the ER and investigate. Being paid to snoop makes her feel like she's died and gone to heaven, but Sam's elation quickly evaporates when she finds out that her sister Jen is being investigated for the murders.


A trio of other suspects, a poisoning scare for her best bud and canine companion Clancy, and the back-and-forth pull of Sam's attraction to the dreamy Michael and the loyal George keep her unbalanced as she tries to juggle social work, secret sleuthing, and a romantic triangle. As usual, Sam takes her snooping to extraordinary heights. She can't seem to stop putting her nose where it doesn't belong.


And this time… she may have gone too far.


If Sam had known when she knocked over the guy's bicycle that it would put her knee-deep in murder again, she might have thought twice.


Richie Klingman, the only representative of the "paparazzi" in Quincy, chased Sam down with his camera in an attempt to grab a quick shot of the local celebrity sleuth. But when the flashbulb went off in her face, she went off on him—or on his bike--and down it went, Richie and all. Turns out that one of the photos Richie took caught the precise moment of a murder on film.


The next thing Sam knows, Richie himself has been stabbed and is in the hospital with a serious chest wound. Sam is stumped. There are no suspects. Instead there are round-the-clock police protecting Sam and her kids, who are home from college for the summer. And there is round-the-clock involvement with her old high school beau George, whom Sam has finally forgiven for standing her up on prom night.


In this third book of the Sam Darling mystery series, you'll be wondering whodunit right up until the murderer is fully exposed and the picture finally emerges.


And a bonus short story!


Read about the beginning of Sam's romance with George... and how it nearly ended.