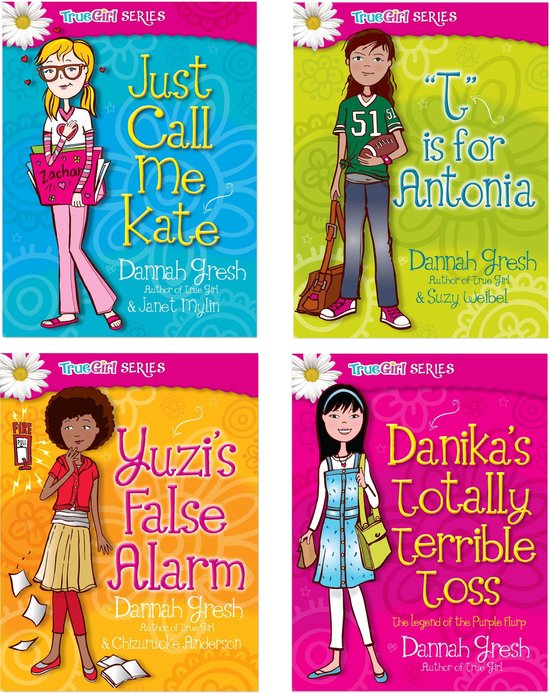 
In Just Call Me Kate, sixth-grader Kate Harding has bigger problems than trying to get her parents to stop call her ''Katie.'' She has a major crush on her older brother's best friend: Zachary Donaldson. In a moment of insanity, she dares to write his name on the bathroom wall in eight-inch high pencil letters. It doesn't take Principal Butter long to match the handwriting to the doodling on her book covers. Kate is sent to detention where she meets up with three new friends who decide to become the True Girl Club. Her case of boy craziness is doused with some good advice from her new friends.


In T is for Antonia, Toni Diaz has a major problem. She's faster, stronger, and taller than most of the boys in her 6th grade class. Doesn't sound like a problem? Think again! She can't understand why God made her both the best athlete in her class and a girl! She wants to play for the Rutherford B. Hayes middle school football team, but school rules. . . and her parents. . . won't allow it. Toni decides to do it anyway. When dressing like a boy to pose for tryouts lands her in detention, she meets the founder of the True Girl Club. The club's crazy assignments help her learn that the coolest person she can be is. . . herself!


In Yuzi's False Alarm, Yuzi Ukachi has every right to be mad. Because of her dad's job, their family has moved all over the place, so it's always been tough to make friends. And now his job has landed Yuzi in quite possibly the smallest town on the planet: Marion, Ohio—the Popcorn Capital of the World. Her mom volunteered her to wear a totally embarrassing corncob costume to the Popcorn Festival, and at school she ends up in detention for something she definitely did not do! When she opens up her heart to the three girls she meets in detention, she's invited into the True Girl Club. The club's adventures teach her that revenge isn't always the sweetest end to a story.


In Danika's Totally Terrible Loss, Danika McAllister has everything a 12-year-old girl could want including a seat at the popular girls' table at lunch and a shot at winning the Miss Teeny Pop crown! But the pressure of her fake, popular personality is building. She ends up exploding and tossing her mom's famous Purple Glurp dessert. It accidentally hits her lunch lady in the head and now she's in big trouble. Not only is she headed to detention, but her dreams of the Teeny Pop crown are in trouble. She learns that she needs a new circle of friends so she can be the real Danika. When her true personality emerges, she discovers that she's not a follower at all. . .and the adventures of the True Girl Club begin.