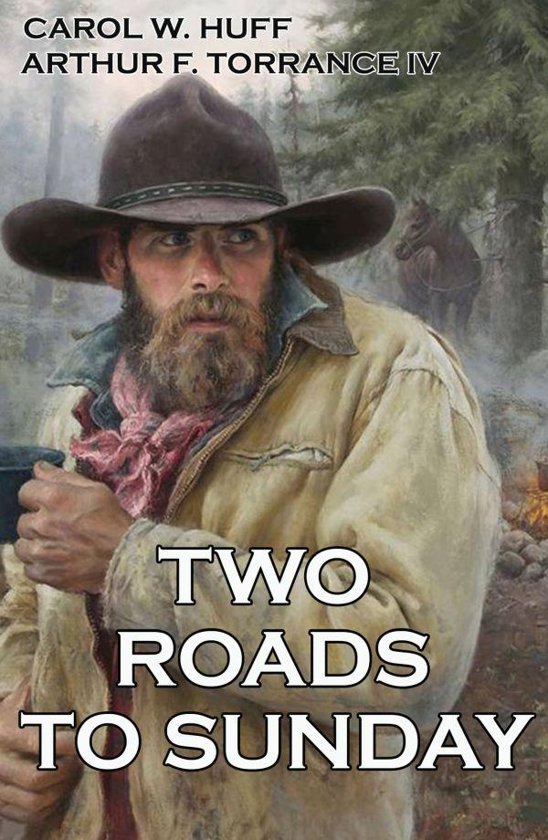 Dirt Wakefield Roams The Badlands Of The West Near A Town Called Sunday. Providence Is The Catalyst For His Path Crossing Sarah Mcclanahan'S, Who Has Endured Death, Rape, Spousal Abuse, Cholera, Grief, And Loss Of Memory Along The Road That Brought Her To Sunday.


The woman stooped over her precious bundle on the ground. The rider in the saddle crowded and taunted her with his horse. She moved sideways, drawing the rider in her direction instead of to the bundle. A small leg protruded and gave a kick in the air, letting him know she had a child in the brown sackcloth. Like a bird with her nest of young, she moved the threat away from her baby and onto herself.


Two Roads to Sunday is the tale of a falsely-accused and wanted man named Dirt Wakefield. Easy with a gun, he leaves a wake of dead bounty hunters, a past wrought with grief, and a lack of forgiveness for himself. A curmudgeon, he roams the Badlands of the West in the 1860s near a town called Sunday. He travels light with only his canine companion, Dawg, and his horse, Dolly. Destiny and pure chance are the catalyst for his path crossing Sarah McClanahan's, whose journey begins in Kentucky. She travels west and meets dire circumstances no woman should have to endure. Death, rape, spousal abuse, sickness, grief, and loss of memory all combine to bring Sarah's trail to Sunday. That trail--Dirt's trail--will change their tomorrows forever. I believe readers will identify with Dirt and Sarah as Dirt learns how to forgive himself and Sarah learns to move forward even when her past tries to suffocate her.


"Love this novel! No cookie-cutter characters here. Each had their own individual personality. The story is full of angst and realism, and Dirt Wakefield is an unforgettable character."-Ann Everett, Amazon best-selling author of Strong Verbs Strong Voice


"...like a suction pump ... pulling me in and not letting go. These authors ... speak in words that paint immediate mental images that seem to breathe their own lives."-Tai Baker, author of The Cash Register Series, the Double Trouble Series and the Olivia Grace Series


"The writing is fresh, the plotting deft and sure....an exciting, rich western with brilliantly drawn characters and excellent dialogue. Extraordinary writers who never let their readers down. Born storytellers and the writing is clean, crisp, and exemplary..."-Mike Jackson, Poet Extraordinaire


"...grabbed hold of me and refused to let go. The vivid depiction of the harsh realities of surviving American badlands was only outdone by the connection I felt with the main players...a spellbinding read..."-Justin Robben, author of A White Road Tale series


"... It's a tough draw to write in a genre ruled by the likes of Louis L'Amour, but these authors don't disappoint. It has all the accompaniments a western reader demands, and the authors have a flair for storytelling that lassos you into the adventure and doesn't let go. Just excellent."-Ryan Maddux, author of Lost in Darkness