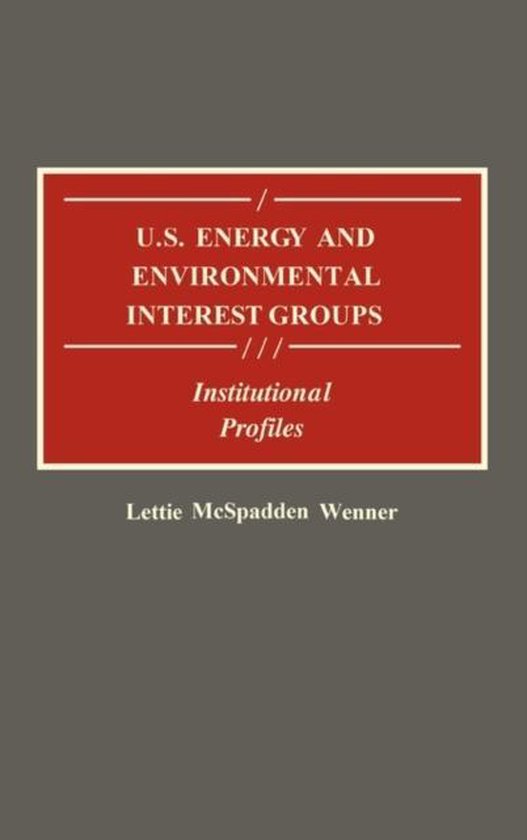 Wenner, who has been an active policy-oriented political scientist in the area of energy/environmental legislation and litigation . . . has created a practitioner's dictionary to the most influential special-interest groups lobbying in the halls of Washington, DC, today. Her introduction offers an excellent summation of how she determined which groups were to be included and describes how she organized the groups. . . . If the purpose of a dictionary is to save time and trouble for researchers, then this is an excellent contribution to the growing literature of environmental and energy policy studies. Choice In the latter part of the 1980s, as political action committees proliferated and the number of lobbyists in Washington, D.C. increased, there was a corresponding increase of interest among scholars in examining this phenomenon. This book defines the universe of groups that lobby in the fields of environmental and energy policy regardless of which side of the many controversies in these areas they represent. Included are groups that have gained national recognition as representatives of the environmental movement; other entries are smaller organizations that focus on one special issue. Their impact may be significant on that policy, but they may be less important than some general public interest lobbies that do not specialize in environmental problems but whose influence on the American political scene makes their opinions significant. Another major category is the large trade association with many interests that go beyond the focus of this book. These groups have been in business for many years and would not fade from view if they stopped all lobbying on these issues. Yet they are some of the most important actors in this issue area today, and to ignore them would be to turn a blind eye to the reality of the political process. A third major type of group that lobbies in this area are the professional and research organizations that are formed around their members' careers. They assume a moderate position on most of the main issues and may hold a balance of power in their hands today. Each group included in the volume is profiled according to its history, membership, sources of funding, structure of organization, strategies used to influence policies, and the types of programs about which the organization is most concerned. In addition to the 148 main entries that comprise the bulk of the book, there were groups described in standard reference works that appeared to qualify them for inclusion in this work but for which there was minimal information; these groups are listed in Appendix A. The questionnaire used to query the groups is included in Appendix B. As a reference tool, this volume will be useful for libraries, as well as for organizations interested in the fields of energy and environment.
Toon meer Toon minder