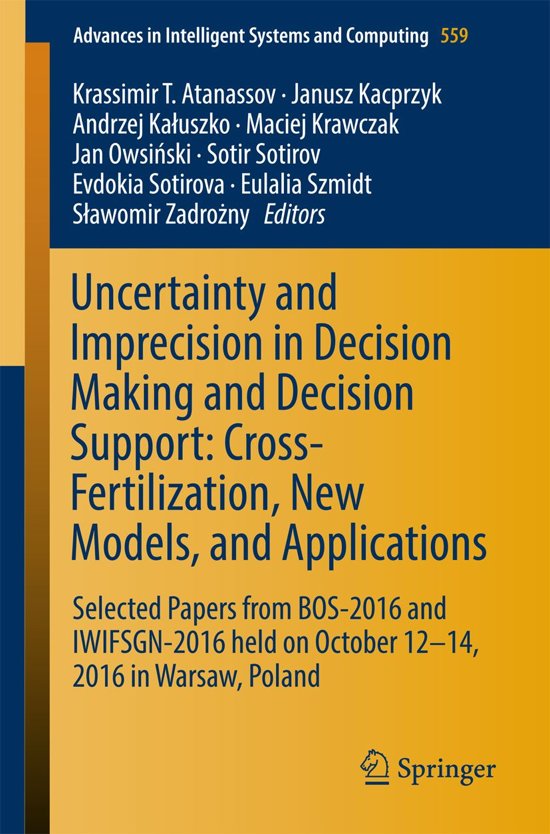 This book presents selected papers from two important conferences held on October 12–14, 2016 in Warsaw, Poland: the Fourteenth National Conference of Operational and Systems Research, BOS-2016, one of the premiere conferences in the field of operational and systems research not only in Poland but also at the European level; and the Fifteenth International Workshop on Intuitionistic Fuzzy Sets and General Nets, IWIFSGN-2016, one of the foremost conferences on fuzzy logic, notably addressing extensions of the traditional fuzzy sets, as well as the Generalized Nets (GNs), a powerful extension of the traditional Petri net paradigm.


The scope of the BOS con


ferences includes all types of problems related to systems modeling, systems analysis, broadly perceived operational research, optimization, decision making, and decision support, to name but a few. In all these areas, virtually all models used have to take into account not only uncertainty in its traditional sense, but also imprecision of information. That is, in addition to traditional probabilistic and statistical tools and techniques, the use of methods based on fuzzy sets can also be sensible. Even more so, employing certain extensions of the classic concept of a fuzzy set can be very useful. Applying intuitionistic fuzzy sets, which are at the core of the IWIFSGN conferences, is a good example. Both conferences, BOS-2016 and IWIFSGN-2016, offered ideal venues for the exchange of ideas, cross-fertilization, and mutual inspiration.