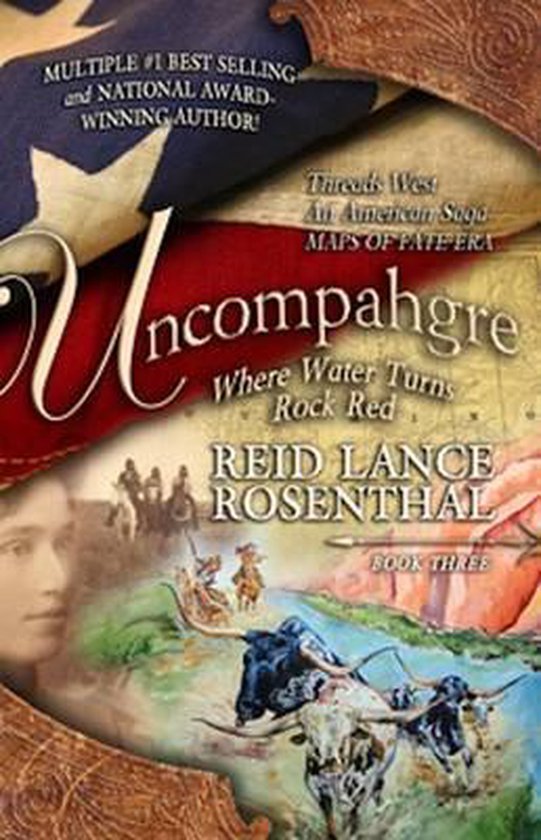 The Adventure and Romance of the America, her people, her spirit, and the West. This is our story. Uncompahgre-where water turns rock red is the third book of the #1 bestselling, Threads West, An American Saga series, recipient of fifteen National Awards--Best Historical Fiction, Best Romance and Best Western! Compared by reviewers, authors and readers alike to Lonesome Dove, Centennial, and L'Amour. Called by some the Gone with the Wind of the West, and applauded by others as rings true and poignant, as authentic and moving as Dances with Wolves. ? In Uncompahgre, the time nears when the first of the next generation of Threads West characters will be born of the brave men and courageous women who have come so far and risked all. The men and women of the saga, having reached their initial destination, pre-Denver, Cherry Creek, are each faced with life-altering decisions. Some must decide to pursue or abandon torrid love affairs that have flowered on the dangerous journey from Europe and across America. Their lives shaken by events they could not foresee and convergence with souls they could never image, they begin to build a nation that's essence is in transition. They have neither country nor culture in common but their dreams and survival demand a tension filled emergence stitched by fate and history. The Oglala Sioux family struggles to cope with the inevitable change casting shadows upon their lands, culture and scared traditions. The elderly slave couple, and the renegade and his young, traumatized captive introduced in Maps of Fate, are bound ever more tightly to the arc of the story-their tragedy and triumph-filed tales weaving into the fabric of a collective destiny, the black-hearted captor unknowingly catapulted by his tortured past into possible redemption. Mormons stream west in the Great Exodus escaping persecution and searching for Zion. Driven north by the Texas Rangers, an outlaw vaquero with royal blood quests for a new sense of self and place. The touchstones of the past are the guideposts to the future. Uncompahgre-where water turns rock red, is the continuation of this tale of America, her people and the West-new lineages join the many threads of uncommon cultures, differing origins and competing ambitions that entwine into the American spirit. Lives and generations are woven on the loom of history, propelled by fate and freedom to form the tapestry that becomes the whole cloth of the nation. It is uniquely American, this meld of the mosaic. ? You will recognize the characters who live in these pages. They are the ancestors of your friends, your neighbors, your co-workers, and your family. They are you. They are us. This is not only their story. It is our story. It is Threads West, An American Saga. ? In Book Four, Moccasin Tracks, releasing in 2014, the fires of future deadly tumult between the states has begun to sweep west. The Threads West characters who have journeyed so far race against an early, foreboding winter to establish their homestead, some preoccupied with the serious complications of their pregnancies, others compelled to follow the call of a separate path, but all united to fend off ever-present danger. The resolution of the Indian Problem is evolving. It will leave families and hearts broken, forever staining the pages of American history. The decades of the Maps of Fate era novels of Threads West book series become the crucible of the souls of generations, the building of the heart of the nation, the destiny of a people, and the relentless energy and beauty of the western landscape. This is the ongoing story of us. Set in authentic locations on three continents and in the jagged peaks of the Rocky Mountains, the life threads of the characters -- whose personalities are forged on the anvil of the land and shaped by the spirit of America -- live, love, strug
Toon meer Toon minder