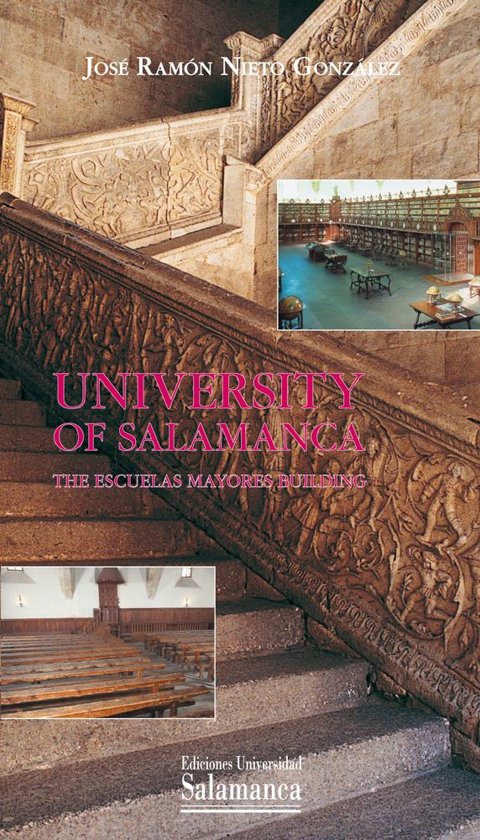 The first quarter of the 15th century saw the start of the construction of this building, which has always been known as the Escuelas Mayores. In 1411, Cardinal Pedro de Luna, an enthusiastic supporter of the University, ordered its construction. A few years later, those involved began to buy up the houses that would eventually offer the space for our Studium. It is in fact surprising that although the University was founded in 1218 by Alfonso IX, two hundred years were to elapse before it was awarded its first premises since prior to that moment its teaching activities had been carried out in the chapels of the Old Cathedral and in houses rented from the Cathedral Chapter. Indeed, as late as the 19th century the conferrals of academic degrees were still being held in the chapel of Saint Barbara. This building abuts the Patio de Escuelas. This Patio de Escuelas was designed by Juan Gallego de Andrada after meetings with Phillip III and was opened up in 1609 to form a true 'antechamber' to it. To the south, this square is faced by the former Hospital de Estudiantes –it now houses the hub of the administration (the Rectorado)– and its southwest corner leads on to the Minor Colleges (Escuelas Menores), buil around the end of the 15th century. The other two walls, unadorned, were built between the end of the 16th century and the first quarter of the 17th. The bronze statue of Fray Luis de Leon is the work of Nicasio Sevilla and has been standing there since 1869. The crenelated walls next to the façade, a tribute to University jurisdiction, are also from the time of Phillip III and replaced an earlier one whose construction was ordered by El Tostado. The crenelations continue on the south, in the street immediately behind the chapel. Up to the 16th century, there were also crenelations on the Fachada de las Cadenas, facing the Cathedral. The Escuelas Mayores are not the fruit of a single project but are rather of a series of extensions introduced from the beginning of the 15th century until the end of the 19th. The older parts reflect Gothic, Mudéjar and Renaissance tones, such that one could speak in terms of a building characterized by a lack of definition of styles, as proposed by Nieto Alcaide. The sequence of construction may have been as follows. The first part to be built would have been the west corridor, with a single floor, followed by the east one, also single-storied and including the oratory of St Jerome. Both of these would have been erected in the first quarter of the 15th century. In 1474 work began on a second chapel, on the ground floor, and a library above it; this is where the present-day chapel stands. Both the chapel and the library were completed by 1479. When the whole part, with both floors, was designated to become the chapel it became necessary to build a new library. This was begun in 1509, and at the same time a floor and also the hallway were added to the west corridor. And in the same year, the so-called Galería de Enigmas (see below) was added. At some unknown date, but certainly before 1469 (the year in which people were starting to talk about a square design) another corridor –smaller than the present-day one– was built. Around 1570, this was reformed with the current corridor on the northern side, under the supervision of Rodrigo Gil de Hontañon, and it became the place where classes were again taught there in 1574-1575. In the second half of the 18th century, today's current chapel and the Salon de Claustros (Senate Hall) were built, and towards the end of the 19th century the cloistered part was completed with another floor built on the eastern corridor and over the northern corridor based on a project by José Secall, who also designed the arch work on the southern corridor. As the culmination of all these constructions and additions, we now have the present edifice, organized around a patio with semicircular arches on the ground floor and five-pointed oge earches on the upper floor, both floors being connected by a magnificent staircase. The disposition of the floors seems to be related to the design of a Roman house, which would in part explain –at least for the defenders of this hypothesis– the addition of the richly sculpted façade, based on Vitruvian influences.