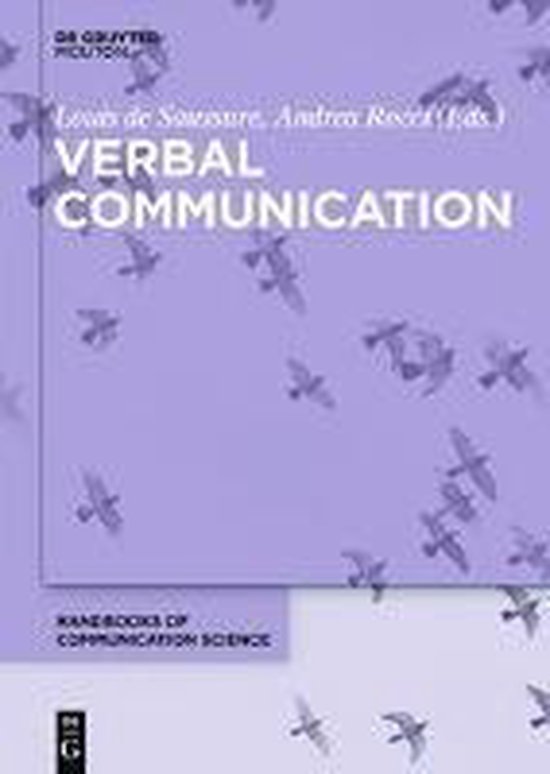 Common sense tells us that verbal communication should be a central concern both for the study of communication and for the study of language. Language is the most pervasive means of communication in human societies, especially if we consider the huge gamut of communication phenomena where spoken and written language combines with other modalities, such as gestures or pictures. Most communication researchers have to deal with issues of language use in their work. Classic methods in communication research - from content analysis to interviews and questionnaires, not to mention the obvious cases of rhetorical analysis and discourse analysis - presuppose the understanding of the meaning of spontaneous or elicited verbal productions. Despite its pervasiveness, verbal communication does not currently define one cohesive and distinct subfield within the communication discipline. The Handbook of Verbal Communication seeks to address this gap. In doing so, it draws not only on the communication discipline, but also on the rich interdisciplinary research on language and communication that developed over the last fifty years as linguistics interacted with the social sciences and the cognitive sciences. The interaction of linguistic research with the social sciences has produced a plethora of approaches to the study of meanings in social context - from conversation analysis to critical discourse analysis, while cognitive research on verbal communication, carried out in cognitive pragmatics as well as in cognitive linguistics, has offered insights into the interaction between language, inference and persuasion and into cognitive processes such as framing or metaphorical mapping. The Handbook of Verbal Communication volume takes into account these two traditions selecting those issues and themes that are most relevant for communication scholars. It addresses background matters such as the evolution of human verbal communication and the relationship between verbal and non-verbal means of communication and offers a an extensive discussion of the explicit and implicit meanings of verbal messages, with a focus on emotive and figurative meanings. Conversation and fundamental types of discourse, such as argument and narrative, are presented in-depth, as is the key notion of discourse genre. The nature of writing systems as well as the interaction of spoken or written language with non-verbal modalities are devoted ample attention. Different contexts of language use are considered, from the mass media and the new media to the organizational contexts. Cultural and linguistic diversity is addressed, with a focus on phenomena such as multilingual communication and translation. A key feature of the volume is the coverage of verbal communication quality. Quality is examined both from a cognitive and from a social perspective. It covers topics that range from to the cognitive processes underlying deceptive communication to the methods that can be used to assess the quality of texts in an organizational context.
Toon meer Toon minder