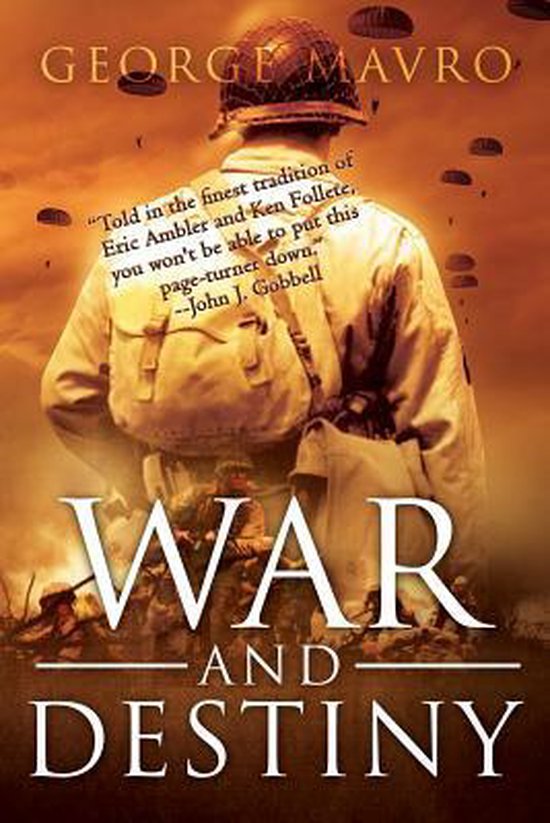 "War and Destiny"
By the late summer of 1940 most of Europe lay under the heel of the Nazi boot or allied with the Axis powers. The tiny but strategic kingdom of Greece with a population of only six million was trying hard, despite several Axis provocations, to maintain her neutrality between the warring powers. Markos Androlakis, an American of Greek descent, chose to travel to his parent's homeland to the island of Crete for an archeological sabbatical. By that winter, the clouds of war soon covered Greece and the tiny nation was invaded by Fascist Italy who was looking for a quick victory.
Markos soon joins the cause against the fascists as an interpreter liaison to the British allied mission on Crete. Offered a commission to the Greek Army, Markos gladly accepts. Throughout the winter of 1940-41 the Greeks astonished the world by not only stopping the second largest axis power dead in its tracks but going on the counter attack and imposing a series of humiliating defeats on Italy. Unfortunately, the euphoria would not last. Germany took notice and quickly remedied the situation. In April 1941 Germany invaded the tiny nation and quickly defeated the allied and Greek forces forcing thousands of survivors and the Greek king to evacuate to Crete.
On 20 May 1941, Germany launched Operation Merkur (Mercury) the largest airborne invasion in history to capture the strategic island of Crete from the allies. Markos is tasked by the allied commander to help evacuate the Hellenic King to the island's south cost to be transported by the Royal Navy to prevent his capture by the Nazis. Unbeknownst to Markos the German Reichsfuhrer Heinrich Himmler has dispatched a ruthless SS officer Georg Mueller to capture the King and return him to Germany. The German paratroopers suffer tremendous loses but the allies fail to dislodge them from a strategic airfield and eventually the Germans get the upper hand. Markos manages to evade the Germans and journeys to Cairo where he is recruited into US army and the COI which would soon become the OSS, Office of strategic services under the leadership "Wild Bill Donovan."
Markos returns to America to help organize a cadre of Greek American agents to help the Greek resistance fight the ruthless and bloody Nazi occupation. The US soon enters the war after the attack on Pearl Harbor and German war Declaration. Markos is eventually reassigned to Egypt were the allies plan a major attack on German airfields on the island of Crete, using commando teams. Markos joins one of the teams in a successful attack but runs into Mueller and his men who attempt to capture and kill the allied agents as they endeavor to escape the island.
Hitler's 1940 drive through the Balkans and the rich oil fields of the mid-east depend on a clear path through Greece. Also, Hitler runs up the stakes by trying to abduct her King. During all this, young New Yorker Markos Androl visits his parent's homeland and is swept up in the Nazi invasion. The tale moves on with a strong sense of realism as Androl races from Crete to Cairo and back again, this time working for Wild Bill Donovan and the OSS. Told in the finest tradition of Eric Ambler and Ken Follete, you won't be able to put this page-turner down. War and Destiny is a classic that will be in print for many years to come.
--John J. Gobbell, Author of Call To Colors and Edge Of Valor