We Remember Them A Biographical Supplement for Fatal Dive 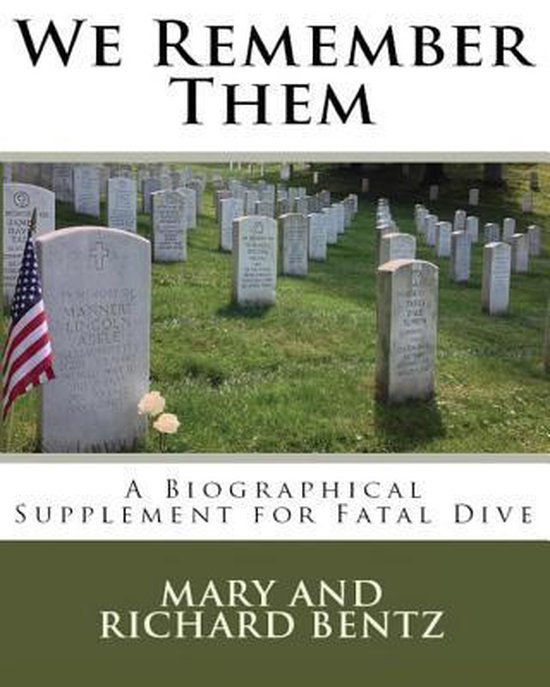 We Remember Them, by Mary and Richard Bentz, is a biographical supplement for the book Fatal Dive, by Peter F. Stevens. Fatal Dive documents the incredible story of the search for and discovery of the WW II submarine USS Grunion (SS-216), which disappeared without a trace on July 30, 1942, near the Aleutian Island of Kiska shortly after the Battle of Midway. When Fatal Dive was outlined, it was decided to include a biography of each of the 70-man crew in an appendix. Due to space limitations, the bios were necessarily brief. The purpose of We Remember Them is to provide extended biographies of the crew, using information that the authors gleaned from many sources, including archival military records at the National Archives and Records Administration (NARA) in College Park, Maryland, the National Personnel Records Center, Military Personnel Records (NPRC-MPR) in St. Louis, Missouri, Charles Hinman, owner of the OnEternalPatrol.com website; and other sources, including photographs, memorabilia, and personal remembrances of family members and friends of the crew of the Grunion.

Catherine (Kay) Abele, wife of the submarine’s commander, LCDR Mannert (Jim) Abele, maintained correspondence with the families of the entire crew, officers and enlisted men alike, through the years following Grunion’s loss. Susan Abele, wife of Jim Abele’s son Bruce, organized the correspondence into binders. These letters became an invaluable resource for this book. They provided insight into what it was like to live without loved ones lost to war with no information about what had become of them. Excerpts from sailors' letters home provide a look at their hopes, their aspirations, and their concerns about family members and loved ones left behind.

Mary and Richard Bentz have long had an interest in submarines, and, in particular, the submarine USS Grunion. Their interest stems from Mary’s family, where Torpedoman’s Mate Third Class Carmine Anthony Parziale’s loss on the Grunion lived in their collective memories -- in fact the very fabric of their lives -- for six decades, without ever knowing what had happened to him.

After Mary and two other Grunion relatives, affectionately known collectively as the “Sub Ladies”, finished the task of finding at least one relative for every crewman, Mary went on to arrange for articles to appear in the home-town newspapers of the entire crew, to serve as the obituaries they had never had. In addition, she has helped many relatives place memorial markers in military or private cemeteries, and has had the entire crew memorialized in such places as The Purple Heart Hall of Honor, the WWII Memorial, the US Navy Memorial, the Veteran Tributes website, and other similar locations and websites. At this time, thirty two Grunion crewmen do not yet have memorial markers. In the near future, Mary and Richard plan to have memorial markers placed for each of them at Arlington National Cemetery, Arlington, Virginia, with full military honors, including horse-drawn, flag-draped caisson, military band, taps, and a 21-gun salute.

While photographing over 3000 pages of the crew’s military records in St. Louis, the Bentzes discovered that, for no apparent reason, none of the officers of the Grunion had been awarded Purple Hearts. Working with the Chief of Naval Operations in Washington, and with the help of a personal letter to the Chief from Bruce Abele, Mary was able to procure the missing Purple Hearts for the officers’ families.

This book has been a six-year project. It and all the work on the Grunion project have truly been labors of love for both authors.
Toon meer Toon minder