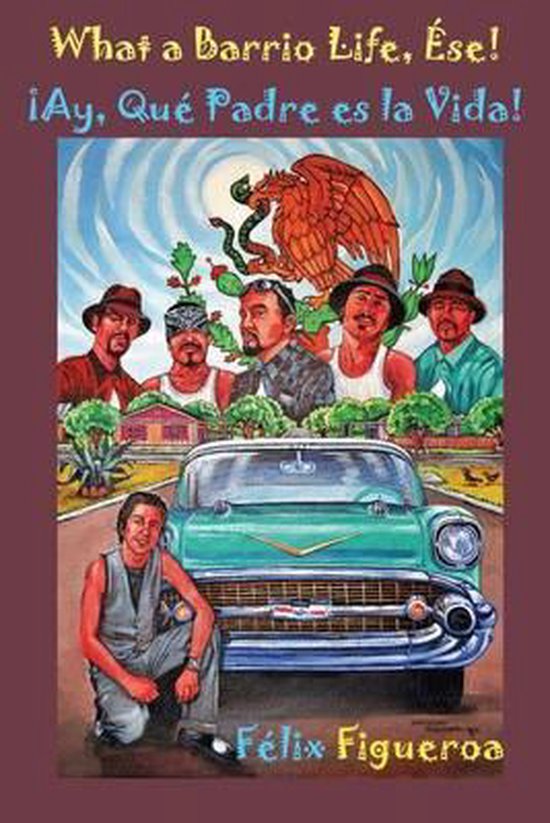 Published by Floricanto Press, this book is an assemblage of characters embedded in humorous stories rooted in barrio life and culture. The author’s father, Félix G. Figueroa, and his brother-in-law Edward García shared many of these stories with the author when he was a young boy. The narrative has been masterfully interwoven with real personal accounts; Mexican-American folklore, culture and tradition; and lots of dichos. It tells the story of one familia—the Porfirio Parcelona family—comprised of a womanizing, beer drinking, always scheming father; an overbearing, extremely religious Catholic mother; a large number of brothers and a hopelessly romantic, overly large older sister. On one occasion, the youngest child in the family, Panchito, is accidentally hurt by his overweight sister, causing the determined father to help his twenty-year old daughter find a boyfriend so she can fall in love, get married and move out of their tiny, cramped, two bedroom casita. He begins by going to church to pray, but winds up getting thrown out by the stern priest because he is drunk when he attends la misa and causes trouble with one of the parishioners; he next goes to la cantina, but gets thrown out of the bar for offending the Gringo bartender; on his way home he walks through the town cemetery and falls into a recently dug grave where he falls asleep and dreams about an encounter with the devil. Félix Figueroa's book, What a Barrio Life, Ése! ¡Ay, Qué Padre es la Vida! has brought back fond memories of the colorful neighborhood of La Hojalata, which was similar to many barrios in the Southwest and its lively characters like Porfirio and his buddies. The stories allow us to understand the rich Mexican American culture of the past when life was simple and innocent. —Dr. Eliseo ‘Cheo’ Torres –Vice President of Student Affairs at the University of New Mexico and author of Curandero: A Life in Mexican Folk Healing. Félix Figueroa writes a riveting account of Latino life in America. The darkness of every day life inside a particular struggling society is cleverly woven into a compassionate and humorous story rarely written in this manner. Porfirio, María Encarnacion, El Space Invader, La Pelona, are characters often heard off but ignored, yet Figueroa brings them to life in a way that is both rich and captivating. This is a poignant characterization of life in el barrio and a must read for all. —Grace Flores-Hughes, author of A Tale of Survival. What a Barrio Life, Ése! ¡Ay, Qué Padre es la Vida! is a must read work of art for all Hispanics. It is not only realistic and witty, but full of cultural and meaningful awareness for those who were not born during our era. Félix hits every aspect of the culture, language, dialect and life as it existed in the 50's, 60's, and early 70's. The book is awesome and full of memories!!! —Eddie Howell, author of Por Unos Elotes (adapted into a screenplay and the movie Harvest of Redemption) Félix R. Figueroa was raised in the small South Texas community of Taft, Texas. Upon graduating from Taft High School in 1975, he went on to attend Southwest Texas State University in San Marcos, Texas, where he majored in Spanish and Drama. He joined the U. S. Postal Service in 1980 and became a Postal Inspector in 1988. After graduating as the class speaker of his Inspection Service graduating class, he was assigned to work in the Rio Grande Valley of Texas and became one of the first Inspectors in the country to do narcotic investigations. In 1990, he received the U. S. Postal Service Meritorious Honor Award for his outstanding work. Félix retired from the Inspection Service on November 30, 2013 and is currently employed as a Court Security Officer at the John Wood Federal Courthouse in San Antonio, Texas. He lives in Schertz, Texas, is married to his wife Veronica and has three children—Clarissa, Claudia and Joseph.
Toon meer Toon minder