What Does the Pathologist Say? Observations on the Methods and Capabilities of Forensic Medicine 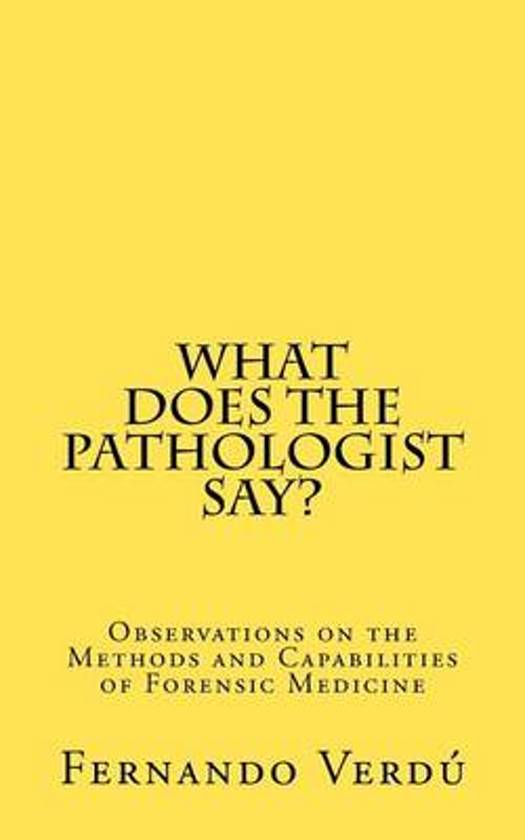 Translated by Terry Kent and Emily Maletin-Kent.“Medical Jurisprudence, or Forensic Medicine, is the science concerned with the application of medical knowledge to certain branches of civil and criminal law”.These words come from the eighth edition of "Medical Jurisprudence and Toxicology" by Glaister, published in 1945, and they go back to the first edition of 1902.But before that date, individuals such as Andrew Duncan Sr. and Jr., William A. Guy, Robert Cowan, and later Sir Sydney Smith and Sir Bernard Spilsbury along with other prominent leading medics highlighted the enormous importance of the science and what potential forensic medicine has to offer for the application of justice.The work you now have in your hands, thanks to the generosity and efforts of Terry Kent and Emily Maletin-Kent, addresses part of this science: the application of medical and biological knowledge to clarify the circumstances surrounding a death.Forensic medicine can have many other applications, in addition to explaining causes of death. Because of this and differing legal and policing structures in different parts of the world, the organization of forensic medicine varies. The structure, the titles, and the roles of the various professionals involved in forensic medicine vary from country to country. Even in the English speaking countries we will find words such as ‘autopsy’ used in the United States and ‘post mortem’ in the United Kingdom.One of the key figures in the UK is the Coroner, who is legally, but not necessarily medically, qualified. In the US, Coroners are being replaced by Medical Examiners, who are medically qualified and sometimes legally qualified as well.Essentially the Coroner is legally responsible for the investigation of the causes of deaths. They can decide, after the initial notification, whether a death can be classified as natural, or accidental, and not require further procedures; or be suspect and require further investigation. Where there is any doubt a Forensic Pathologist will be called upon to carry out the post-mortem to assist the Coroner to reach his final conclusions. Usually in suspicious deaths a Forensic Pathologist will also attend the scene of the death for a preliminary examination of the body and its surroundings.In the event that a Forensic Pathologist is not available in some jurisdictions a qualified Pathologist may be allowed to carry out the autopsy.Other medical professionals assisting police investigations are Police Surgeons, who unlike the Coroner, again are medically qualified. They may also, in contrast to the Coroner and the Forensic Pathologist, also work with the living. They will carry out examinations of victims of physical or sexual assault and for example take blood samples when required. In Spain, you will find, the model is different. There is a so called ‘Coroner’ but they can handle cases of both living and dead. They can handle the analysis of an assault with a weapon not resulting in death, but also study the body found at the bottom of a swimming pool.Things are gradually changing with more and more specialization. Meanwhile, the title of this book, ¿Qué dice el Forense? could be translated as a perhaps ...What does the Pathologist say? ... Let us see
Toon meer Toon minder