What is a Lollard? Dissent and Belief in Late Medieval England 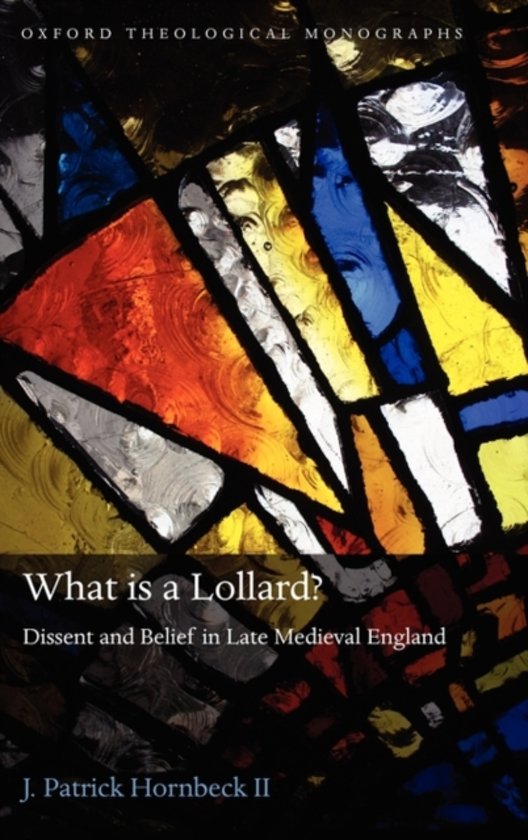 What is a lollard? Generations of historians and propagandists, bishops and inquisitors, theologians and polemicists have asked this question about the dissenters who began to trouble the English church in the late fourteenth century; indeed, many interpretations of the English Reformation have turned on its answer. This is a book not only about lollards but also about the terms and categories that have been used to describe them: through the process of documenting and analysing the dissenting beliefs preserved in lollard texts and the records of heresy trials, what becomes apparent is that there is no static essence that we can call lollardy. Rather than a narrowly defined theological category, lollardy is and has been a capacious term, under which all manner of religious outliers await closer examination. J. Patrick Hornbeck II explores the wide range of lollard beliefs on some of the key issues in late medieval Christianity: how one is saved; what truly happens in the sacrament of the eucharist; who can get married, and why; whether there should exist discrete orders of clergy, or even the pope. He argues that the beliefs of individual dissenters were conditioned by a number of social, textual, and cultural factors, including the ideas they discussed with other members of their local communities, the texts to which they had access, and the influence of mainstream religion and spirituality.
Toon meer Toon minder

[Hornbeck] has done a wonderful job of opening up the question of variety of belief in late medieval England ... this is an admirably humane book. * Ian Forrest, English Historical Review * This is a refreshing and challenging study, social, textual, and cultural, which will be enjoyed by anyone with an interest in the roots of Reformation ideas. * Dr G.R. Evans, Church Times * This book is important for two reasons. First, because it proposes a new methodological model for the study of lollardy and, second, because it provides a comprehensive synthesis and survey of English heterodox beliefs in a number of key doctrinal areas ... a valuable contribution * Rob Lutton, Journal of Ecclesiastical History * This book is a model of how to write a monograph; it is one of the best books on medieval heresy to appear for some time... Professor Hornbeck's book is extremely important in many ways. It is the best book to date on lollardry... a treasure. It is an ideal combination of precise scholarship, sophisticated understanding of issues, open-minded investigation, and sharp awareness of how the subject relates to wider issued in both theology and historiography * Jeffrey Burton Russell, Church History * an engaging and, in many respects, excellent study... [T]he book has much to recommend it to both students and more advanced researchers. It is exceedingly well written. Hornbeck has a wonderful gift for clarity of thought and expression, which is put to excellent use here in explaining difficult theological issues, and the book is blessedly free of jargon. It would serve as a fine introduction to the subject for undergraduates. * Maureen Jurkowski, The Medieval Review * ...interesting and provocative...Both for its originality...and on account of the comprehensiveness and sophistication of the treatment, the work is very welcome. * Norman Tanner The Journal of Theological Studies Vol 62 Part 2 Oct 2011 * ...an authoritative and much-needed exploration of the world of the Lollards, considering their beliefs and motivations in great detail. * Anna French, Theology *
Toon meer Toon minder