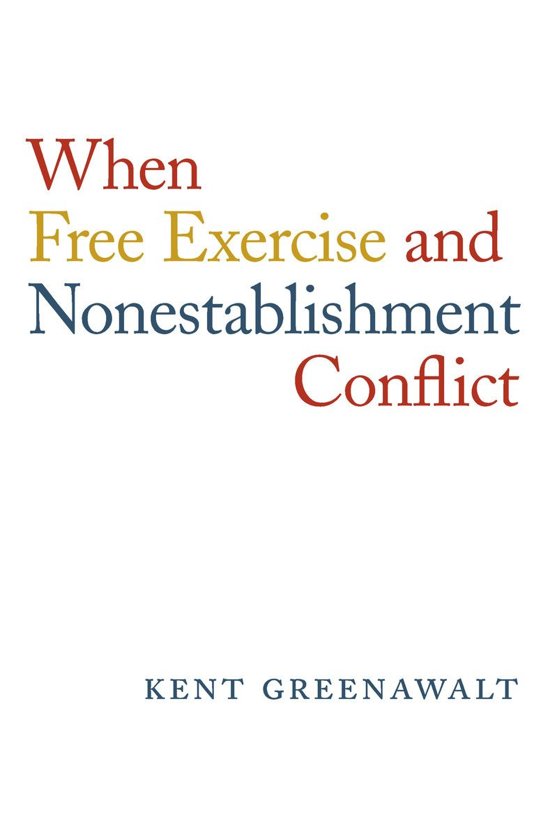 "Congress shall make no law reflecting an establishment of religion or prohibiting the free exercise thereof." The First Amendment aims to separate church and state, but Kent Greenawalt examines many situations in which its two clauses—the Nonestablishment Clause and the Free Exercise Clause—point in opposite directions. How should courts decide?

Greenawalt delivers just what he promises in this volume's matter-of-fact title: a detailed examination of the various tensions between the free exercise and establishment clauses of the First Amendment. Chapters cover a wide range of issues, from religious practice within government institutions (namely the military and prisons) to various religious exemptions from laws concerning drug use, medical insurance, and zoning restrictions.-- (12/01/2017) Greenawalt is a leading figure on religious freedom in the United States, and he has written a compelling and sophisticated book. Not only is his mastery of First Amendment jurisprudence evident here, but also his deep understanding of related areas, such as political philosophy and legal interpretation. Greenawalt's unique methodology illustrates how it is possible to assess constitutional values with care and precision across a breathtaking range of cases and issues.--Nelson Tebbe, author of Religious Freedom in an Egalitarian Age Kent Greenawalt has been writing about the religion clauses for many years, and his work is so voluminous that only a few specialists are familiar with it. This book, beautifully written and demonstrating the author's easy mastery of complex legal theories, presents the major Greenawaltian themes in a shorter form, with some new arguments in response to current issues, such as Hobby Lobby and the controversy over gay rights and religion.--Andrew Koppelman, author of Defending American Religious Neutrality
Toon meer Toon minder