Who Lost America? Can America's Democratic Identity And Government Survive Our Ethical, Political and Economic Failures 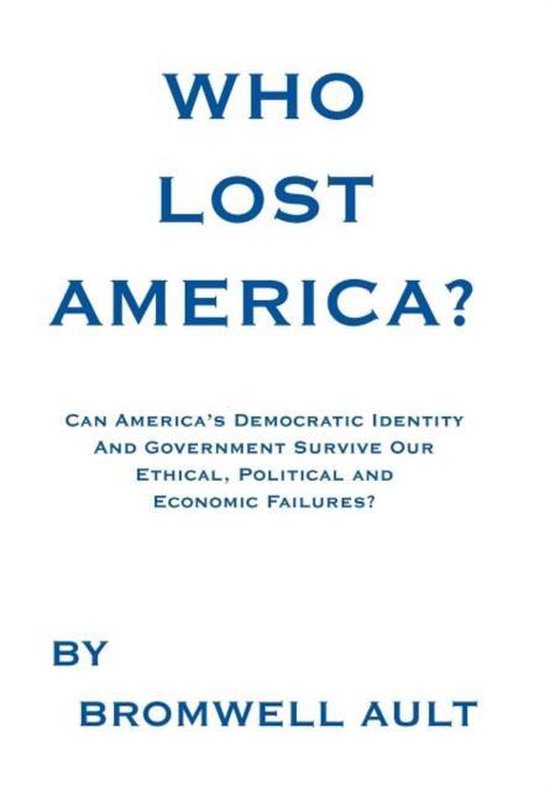 
Bromwell Ault is an essayist and a moralist. He presents here a group of essays examining the changes and weaknesses he has seen growing in American society over the past half century. Central to his thesis is the prospect of "institutional failure" as American politics and society break down from multiple causes. One cause is population growth. Political polarization and the corrupting role of money are among the others. It is a sobering book but a valuable one. You will probably agree with much of it. You will find all of it enlightening.
--- Lindsey Grant, Santa Fe, NM, 6-28-2011
The highly educated, cosmopolitan patriots who imagined and constructed the world's first truly functioning republic with its proud Rule of Law and its careful checks and balances could not have foreseen how their present day successors might abuse their accomplishments to our current dangerous level of disorder. Author Ault, a retired businessman, has dramatically traced the process by which the US has been brought to a state of moral and financial dysfunction in a new book which provides a strong wake up call to all citizens.
--- Donald A. Collins, Washington, DC, author and journalist, 5-12-2011
Bromwell Ault authors a unique book from an even more profound perspective. His four score years have given him a front row seat to the rise and demise of the United States of America. Whether this civilization understands its dilemma or not, Ault clearly identifies every aspect of America's current predicament. His compelling prose connected to basic realities renders an adroit understanding of what America faces and what actions her people must take if future generations expect to enjoy viable lives in the 21st century. It's a must read for every member of Congress as well as the president.
--- Frosty Wooldridge, Golden, CO, teacher, journalist and author, 5-31-2011
Toon meer Toon minder