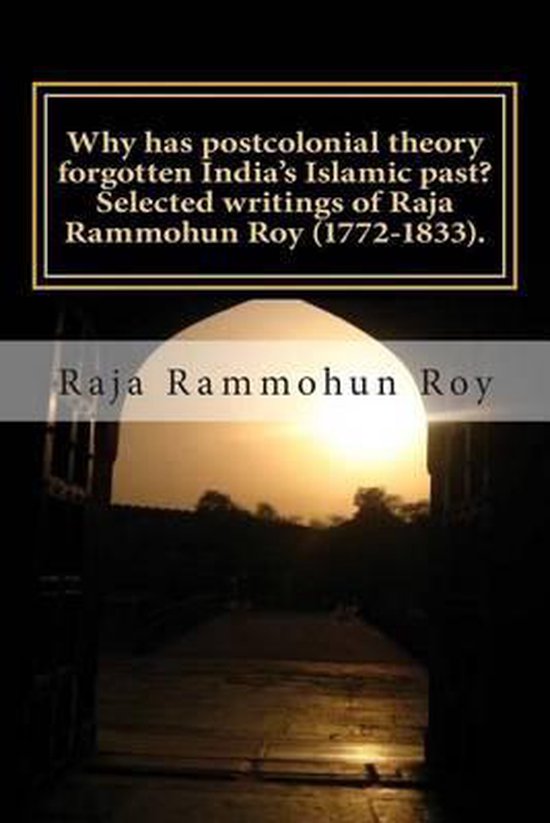 Postcolonial theory assumes that European colonization in the last two centuries can be understood within binaries of: colonized-ruler, center-periphery, hegemonic-dominant/ margins, and that these can be the only referential frameworks within which the engagement between the colonial powers and the colonies can be examined. In this process, we tend to erase the pre-colonial pasts, and the heterogeneity which would have been a norm within the colonial societies. In our haste to erase the influence that Islam has had on the Indian psyche, we have arrived at a skewered notion of identity. If we look at the writings of Raja Rammohun Roy (1772-1833), we realize that it was not unusual for educated Hindus to be also trained in Islamic theology. Rammohun's first work, a treatise in Persian (with an Arabic preface), titled Tuhfat-ul-Muwahhidin, or, A Gift to Monotheists was a critique of Hindu idolatory, and was written in an abstruse style, and made use of neo-platonic, Arab logic and philosophy. The causal connection is very interesting; Islamic theology comprises part of Rammohun's education and he simultaneously uses it to critique Islam and Hinduism. Does this imply that most Hindus would have been familiar with an Islamic Other, a fact that was erased from their psyches once the Britishers arrived in India ? As a young man, Rammohun was educated in Bengali, and later Persian as the latter was the official language. We can speculate that his education would have been a model of how many young men would have been educated. He was sent to Patna to learn Arabic, where he was taught from Arabic translations of Euclid and Aristotle, the Koran, and the writings of the Sufis. Subsequently, he studied Sanskrit at Benares. About this period he wrote: In conformity with the usage of my paternal race, and the wish of my father, I studied the Persian and Arabic languages, these being indispensable to those who attached themselves to the courts of the Mohamaden princes, and agreeably to the usage of my maternal relations, I devoted myself to the study of the Sanskrit and the theological works written in it, which contain the body of Hindoo literature, law and religion. He studied in five different languages, namely, Sanskrit, Arabic, Persian, Urdu and Bengali. The Sanskrit and the Arabic systems of education were very different from each other, but each is seen as indispensable to the other. Rammohun reveals remarkable ease in how he was able to master these two varied systems of knowledge. By the time of Sir William Jones (1746-1794), England had become an increasingly print-oriented society, shifting away from its oral past. This explains Jones' feverish desire to transcribe every manuscript into print, as the process would lend an element of fixity to unstable scribal texts. In an advertisement in The Calcutta Gazette, in 1789, Sir William Jones wrote: The correctness of modern Arabian and Persian Books is truly deplorable, nothing can preserve them in any degree of accuracy but the art of printing; and if Asiatic literature should ever be general, it must diffuse itself, as Greek learning was diffused in Italy after the taking of Constantinople, by mere impressions of the best manuscripts without versions or comments, which future scholars would add at their leisure to future editions: but no printer should engage in so expensive a business without the patronage and the purse of monarchs of states, or society of wealthy individuals or at least without a large public subscription. Jones was extremely conscious of entering a realm of scribal culture in Bengal, and this is reflected in his desire to constantly transfer manuscripts into printed texts. In a way, by transferring written texts into print, his central aim was to codify knowledge, and in the process allow for control of what was disseminated about India.
Toon meer Toon minder