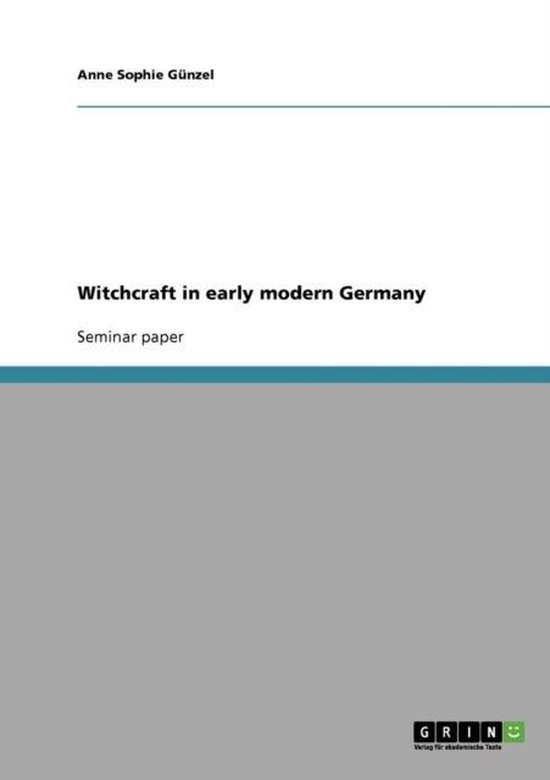 Seminar paper from the year 2004 in the subject History Europe - Other Countries - Middle Ages, Early Modern Age, grade: English Grade:58% von 70%, University of Nottingham (School of History), course: Hauptseminar: Gender and Society in Early Modern Europe, language: English, abstract: 'Witch- hunting is seen as something pathological, a disease infecting like a plague the body of the communities in witch it raged.'1 With these words the historian Bob Scribner described witchcraft and witch-hunts. They are defined as something negative and pathological and it is obviously that witchcraft could easily emerged because of the traditional beliefs rooted in the early modern society of Germany. Witchcraft and witchhunts emerged in this period and made the population susceptible to the carrying out of denunciation and elimination of innocent people. The population had been easily influenced by the authorities like magistrates and their fellow citizens. In the following discussion/passage, witchcraft and witch-hunts concerning the early modern Europe will be less prominent rather than the study about witchcraft and witchhunts in early modern Germany. In particular the main focus will stress on the south of Germany because it was the centre of witchcraft and witch-hunts. In addition to that some examples will be mentioned to show special witchcraft and witch- hunt cases. First it will be examined how the term 'witch' is defined shown in a historical, linguistic and an etymological way. Then the two authors of the Malleus maleficarum2 and their ideas about witches and witchcraft will be mentioned. In the forth chapter the social context shall be examined. In this passage the accused shall be represented and the reasons which led to their accusation. In the last chapter the witch-hunts in early modern Germany shall be represented. It keeps the question in what way the witch-hunts increased during the early modern period and which reasons contributed to their decline. Furthe
Toon meer Toon minder