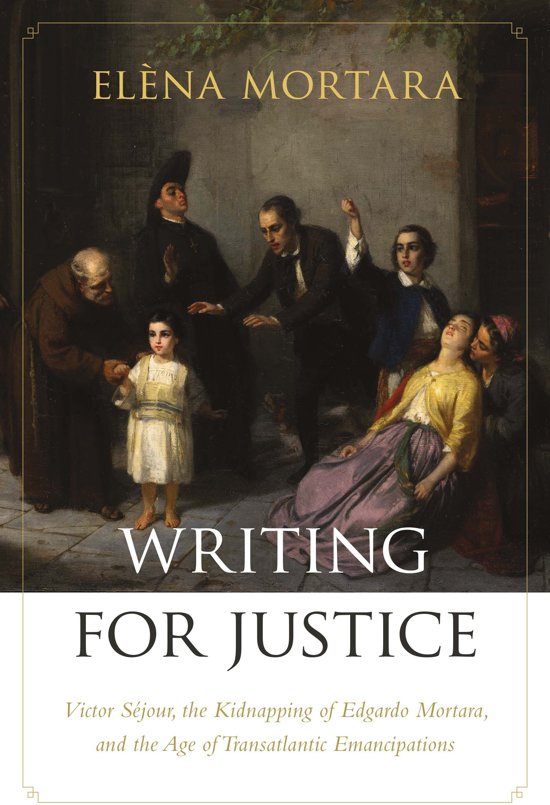 In Writing for Justice, Elèna Mortara presents a richly layered study of the cultural and intellectual atmosphere of mid-nineteenth-century Europe and the United States, through close readings of the life and work of Victor Séjour, an expat American Creole from New Orleans living in Paris. In addition to writing The Mulatto, an early story on slavery in Saint-Domingue, Séjour penned La Tireuse de cartes (The Fortune-Teller, 1859), a popular play based on the famed Mortara case. In this historical incident, Pope Pius IX kidnapped Edgardo Mortara, the child of a Jewish family living in the Papal States. The details of the play's production—and its reception on both sides of the Atlantic—are intertwined with the events of the Italian Risorgimento and of pre–Civil War America. Writing for Justice is full of surprising encounters with French and American writers and historical figures, including Hugo, Hawthorne, Twain, Napoleon III, Garibaldi, and Lincoln. As Elèna Mortara passionately argues, the enormous amount of public attention received by the case reveals an era of underappreciated transatlantic intellectual exchange, in which an African American writer used notions of emancipation in religious as well as racial terms, linking the plight of blacks in America to that of Jews in Europe, and to the larger battles for freedom and nationhood advancing across the continent. This book will appeal both to general readers and to scholars, including historians, literary critics, and specialists in African American studies, Jewish, Catholic, or religious studies, multilingual American literature, francophone literature, theatrical life, nineteenth-century European politics, and cross-cultural encounters.

S jour had a bent for crossing the boundaries between cultures: espousing the cause of the discriminated Jews . . . he was able to give a universal dimension to his commitment, in line with the movement of emancipation, against slavery and prejudice, which was then becoming prominent on both sides of the Atlantic. --Antonio Carioti Corriere della sera A most illuminating read. . . . A fine contribution to the relatively new approach to American Studies--multiethnic and multilingual . . . in its claim for S jour and similar others who are or should be part of the American canon. --Jules Chametzky Massachusetts Review Writing for Justice is an exemplary instance of scholarship that illuminates the transnational dimension of our history. --M. Lynn Weiss The Common Reader The originality of the study is marked by the author's use of a range of methodologies and the linking of a number of academic disciplines. . . . The personal aspect of the work adds an additional lens which illustrates how the past can be illuminated by a contemporary perspective. --M. Lynn Weiss American Studies Network
Toon meer Toon minder