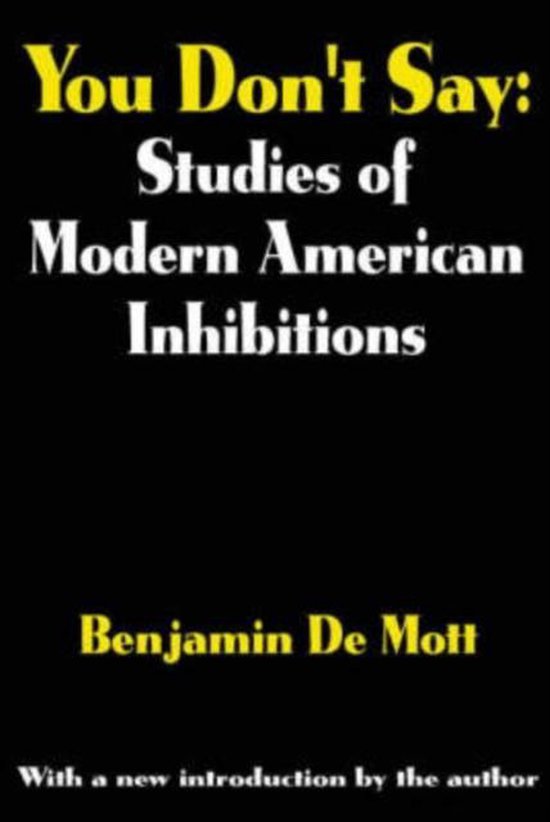 In this era of political correctness, it is often impossible to say things as one would like. Indeed, certain ways of feeling and talking that were once acceptable are now, in effect, forbidden. Of course, taboos extend further than speech. Social and sexual inhibitions are also evident. Benjamin DeMott argues that the very least a society should do is to try to understand the meaning of its own inhibitions. As he writes in this new edition of You Don't Say, a supple awareness of the effective censorship of the day can toughen resistance to clich and stereotype, and is absolutely indispensable to the survival of sharp minds. At the center of You Don't Say is the proposition that the present age of personal liberation has created as many inhibitions as it has abolished. Some of our new-found freedoms could be employed with a sharper sense of tact. And some freedoms we have lost are worth remembering-or even recovering. In the essays that comprise You Don't Say DeMott reflects on the use of language, how modern man has claimed to be free of repression though the opposite is true, and how people who object to certain types of language and prefer verbal ambiguity do so possibly to assert their moral dignity and intelligence. The book is full of sharp observations, witty commentary, and empathetic description of the contemporary social and cultural scene. In an essay entitled The Anatomy of Playboy, DeMott correlates the magazine's popularity with its reductionist tendencies: the world becomes reduced to the realities of sexual need and deprivation. In The Passionate Mutes, the author reflects on the changing language of the greeting card throughout the years. Dirty Words? is a meditation on language itself, and on how mastery of the word was at one time a key to power. And in Oyiemu-O? DeMott considers the writing of native African and Indian authors in an age during which the colonialist viewpoint was considered authoritative. The author's new introduction discusses the essays in their historical context and how they are relevant to the present day, and describes how the book came into being. [A] book distinguished by its beauty as by its wisdom for-although we may feel the pressure of inhibition against admitting it-intellectual courage can be as beautiful as bodies swayed to music. The intelligence of hope can be as passionate as sexual hunger. -New York Times Book Review Benjamin DeMott is an essayist, novelist, and journalist. He was professor of English at Amherst College, and a consultant and writer for National Education Television. He is the author of The Body's Cage, Hells & Benefits, a collection of essays, and Killer Woman Blues: Why Americans Can't Think Straight About Gender and Power.
Toon meer Toon minder