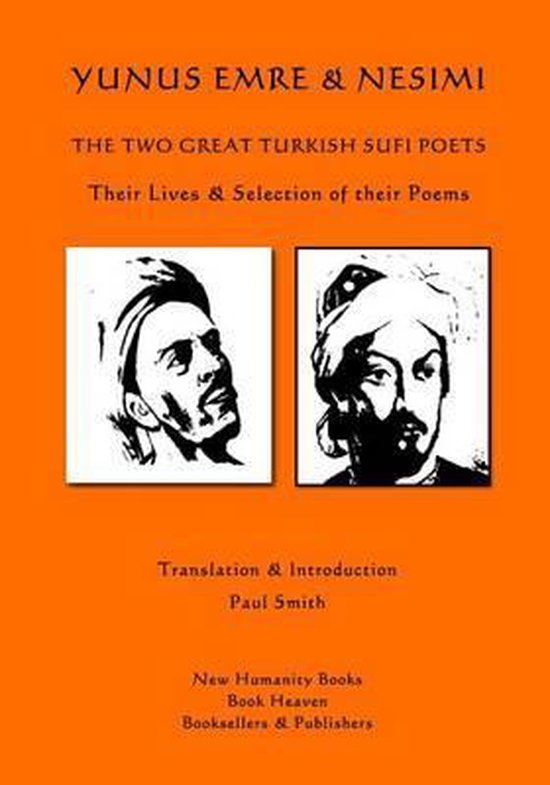 YUNUS EMRE & NESIMITHE TWO GREAT TURKISH SUFI POETSTheir Lives & Selection of their PoemsTranslation & Introduction Paul SmithYunus Emre (d. 132o) is considered one of the most important Turkish poets having a great influence on Turkish literature from his own time until today. His poems concern divine love as well as human love of the Divine as God and the Perfect Master, Beloved, Friend and human destiny and weakness. Little is known of his life other than he became a Sufi dervish Perfect Master (Qutub). A contemporary of Rumi, it is told the two great souls met: Rumi asked Yunus what he thought of his huge work, the Mesnevi. Yunus said, “Excellent! But I would have done it differently.” Surprised, Rumi asked how. Yunus replied, “I’d have written, ‘I came from the eternal, clothed myself in flesh, took the name Yunus.’” This illustrates his simple approach that has made him loved by many. Here is the largest selection of his poems translated into English mainly in the form of the gazel that he often used. Nesimi (1369-1417) is one of the greatest mystical poets of the late 14th and early 15th centuries and one of the most prominent early masters in Turkish/Azerbaijani literary history. For Nesimi at the centre of Creation there was God, who bestowed His Light on man. Through sacrifice and self-perfection, man can become one with Him. As a direct result of his beliefs he was skinned alive. His tomb in Aleppo remains an important place of pilgrimage to this day. His work consists of two collections of poems, one in Persian and the most important in Turkish that consists of 250-300 ghazels and about 175 roba’is. After his death his work continued to exercise an influence on Turkish language poets and authors. The 600th anniversary of his birth was celebrated worldwide by UNESCO. The Introduction is on their Lives & Times & Poetry and the Forms in which they wrote and on Sufism & Poetry, Turkish Poetry and the Turkish Language. Selected Bibliographies. The rhyme-structure has been kept and the beauty and meaning of these beautiful, mystical poems. Large Format Paperback 7” x 10” 416 pages.Paul Smith is a poet, author and translator of many books of Sufi poets of the Persian, Arabic, Urdu, Turkish, Pashtu and other languages including Hafiz, Sadi, Nizami, Rumi, ‘Attar, Sana’i, Jahan Khatun, Obeyd Zakani, Nesimi, Kabir, Anvari, Ansari, Jami, Khayyam, Rudaki, Yunus Emre. Rahman Baba, Lalla Ded, Iqbal, Ghalib, Nazir Akbarabadi, Ibn al-Farid and many others, as well as poetry, fiction, plays, biographies, children’s books and screenplays.www.newhumanitybooksbookheaven.com
Toon meer Toon minder