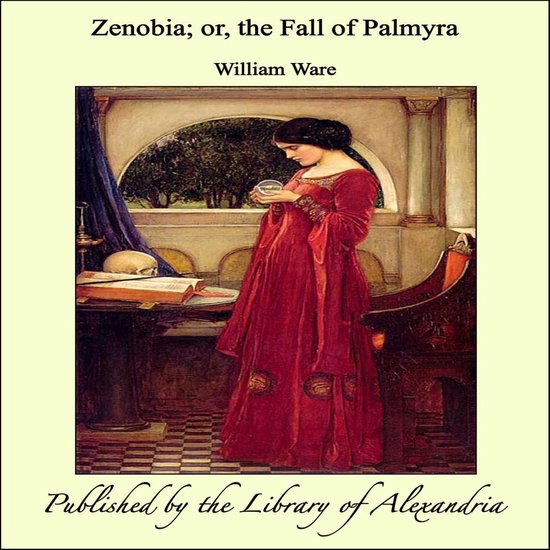 Letter I. It is with difficulty that I persuade myself, that it is I who am sitting and writing to you from this great city of the East. Whether I look upon the face of nature, or the works of man, I see every thing different from what the West presents; so widely different, that it seems to me, at times, as if I were subject to the power of a dream. But I rouse myself, and find that I am awake, and that it is really I, your old friend and neighbor, Piso, late a dweller upon the Coelian hill, who am now basking in the warm skies of Palmyra, and, notwithstanding all the splendor and luxury by which I am surrounded, longing to be once more in Rome, by the side of my Curtius, and with him discoursing, as we have been wont to do, of the acts and policy of the magnificent Aurelian. But to the purpose of this letter, which is, in agreement with my promise, to tell you of my fortunes since I parted from you, and of my good or ill success, as it may be, in the prosecution of that affair which has driven me so far from my beloved Rome. O, Humanity! why art thou so afflicted? Why have the immortal gods made the cup of life so bitter? And why am I singled out to partake of one that seems all bitter? My feelings sometimes overmaster my philosophy. You can forgive this, who know my sorrows. Still I am delaying to inform you concerning my journey and my arrival. Now I will begin. As soon as I had lost sight of you weeping on the quay, holding in your hand the little Gallus, and of the dear Lucilia leaning on your arm, and could no longer, even by mounting upon the highest part of the vessel, discern the waving of your hands, nor cause you to see the fervor with which I returned the sign of friendship, I at once left off thinking of you, as far as I could, and to divert my thoughts, began to examine, as if I had never seen them before, the banks of the yellow Tiber. At first the crowds of shipping, of every form and from every part of the world, distracted the sight, and compelled me to observe what was immediately around me. The cries of the sailors, as they were engaged in managing different parts of their vessels, or as they called out in violent and abusive terms to those who passed them, or as their several galleys struck against each other in their attempts to go up or down the river, together with the frequent roarings and bellowings of whole cargoes of wild beasts from the deserts of Asia and Africa destined to the amphitheatre, intermingled with the jargon of an hundred different barbarian languages from the thousands who thronged the decks of this fleet of all nations,--these sights and sounds at first wholly absorbed me, and for a moment shut all the world besides--even you--out of my mind. It was a strange yet inspiring scene, and gave me greater thoughts than ever of the power and majesty of Rome. Here were men and ships that had traversed oceans and continents to bring the offerings of their toil, and lay them at the feet of the mistress of the world. And over all this bustle, created by the busy spirit of commerce, a splendor and gayety were thrown by numerous triremes and boats of pleasure, which, glittering under the light of a summer's morning sun, were just setting out upon some excursion of pleasure, with streamers floating from the slender masts, music swelling up from innumerable performers, and shouts of merry laughter from crowds of the rich and noble youths of the city, who reclined upon the decks, beneath canopies of the richest dyes. As these Cleopatra barges floated along with their soft burden, torrents of vituperative epithet were poured upon them by the rough children of Neptune, which was received with an easy indifference, or returned with no lack of ability in that sort of warfare, according to the temper or breeding of the parties