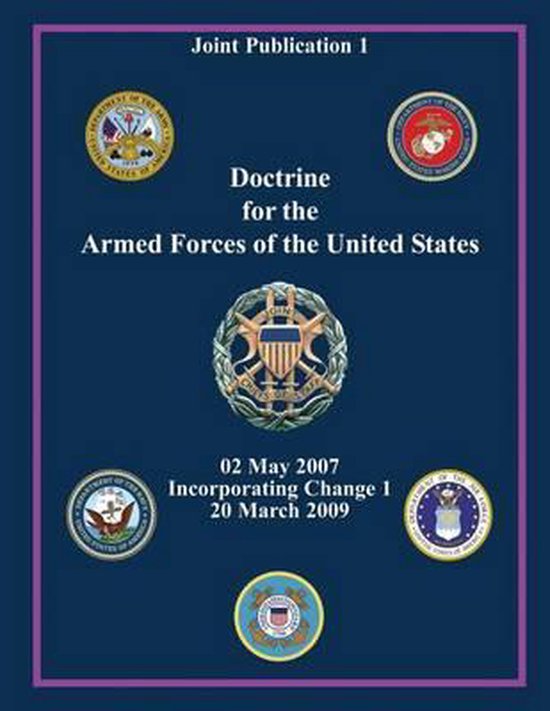 This publication is the capstone joint doctrine publication. It provides doctrine for unified action by the Armed Forces of the United States. As such, it specifies the authorized command relationships and authority that military commanders can use, provides guidance for the exercise of that military authority, provides fundamental principles and guidance for command and control, prescribes guidance for organizing joint forces, and describes policy for selected joint activities. It also provides the doctrinal basis for interagency coordination and for US military involvement in multiagency and multinational operations. Joint doctrine promotes a common perspective from which to plan, train, and conduct military operations. It represents what is taught, believed, and advocated as what is right (i.e., what works best). Conducting joint operations generally involve 12 broad principles, collectively known as the “principles of joint operations”. These principles guide warfighting at the strategic, operational, and tactical levels of war. They combine the nine historical principles of war (present in joint doctrine since its inception) with three additional principles born out of experience across the range of military operations. US military service is based on values that US military experience has proven to be vital for operational success. These values adhere to the most idealistic societal norms, are common to all the Services, and represent the essence of military professionalism. Competent joint warfighters must be skilled in thinking strategically and at optimizing joint capabilities, applying strategic and operational art, and having a joint perspective. There are five values, while not specific to joint operations, that have special impact on the conduct of joint operations. The values are integrity, competency, physical courage, moral courage, and teamwork. The Armed Forces fulfill unique and crucial roles, defending the United States against all adversaries and serving the Nation as a bulwark and the guarantors of its security and independence. When called to action, the Armed Forces support and defend national interests worldwide. The Armed Forces embody the highest values and standards of American society and the profession of arms. The Armed Forces fulfill their roles, missions, and functions within the American system of civil-military relations. The Armed Forces also serve under the civilian control of the President who is the Commander in Chief. The nature of the challenges to the United States and its interests demand that the Armed Forces operate as a fully integrated joint team across the range of military operations. These operations may take place with the military forces of allies and coalition partners, US and foreign government agencies, state and local government agencies, and intergovernmental and nongovernmental organizations. The challenges are best met when the unified action of the Armed Forces elicits the maximum contribution from each Service and Department of Defense (DOD) agency and their unique but complementary capabilities. The resulting synergy from their synchronized and integrated action is a direct reflection of those capabilities. Joint warfare is team warfare. Effective integration of joint forces exposes no weak points or seams to an adversary. They rapidly and efficiently find and exploit the adversary’s critical vulnerabilities and other weak points as they contribute most to mission accomplishment. This does not mean that all forces will be equally represented in each operation. Joint force commanders (JFCs) may choose the capabilities they need from the forces at their disposal.
Toon meer Toon minder