Mass Politics in Tough Times Opinions, Votes and Protest in the Great Recession 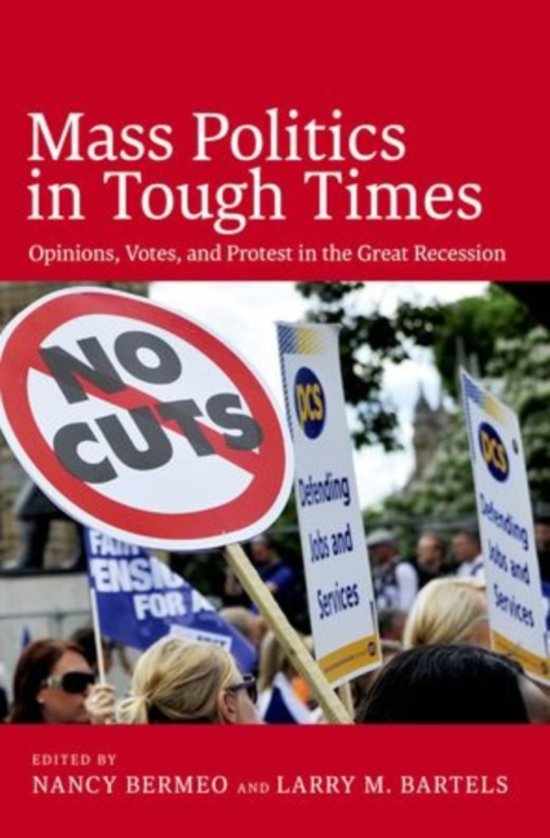 The impact of the Great Depression on politics in the 1930s was both transformative and shocking. The role of government in America was forever transformed, and across Europe socialist, communist, and fascist parties saw their support skyrocket. Most famously, the National Socialists seized power in Germany in 1933, setting off a chain of events that led to the greatest conflagration in world history. The recent Great Recession has not been as severe as the Great Recession, but it has been severe enough, producing a half decade of negative and/or slow growth across the advanced industrial world. Yet the response by voters has been extraordinarily muted considering the circumstances. Why is this? In Mass Politics in Tough Times, the eminent political scientists Larry Bartels and Nancy Bermeo have gathered a group of leading scholars to analyze the political responses to the Great Recession in the US, Western Europe, and East-Central Europe. In contrast to works that focus on policy responses to the Recession, they examine how ordinary voters have responded. In almost every country, most voters have not shifted their allegiance to either far left or far right parties. Instead, they've continued to act as they have in more normal times: vote based on their own personal circumstances and punish the incumbents who were on watch when the bad turn occurred regardless of whether they were center-left or center-right. In some countries, electoral trends that existed before the Recession have continued. The US, for instance, saw no real increase in popular support for an expanded welfare state. In fact, the anti-regulatory right, which gained strength before the Recession occurred, experienced a series of victories in Wisconsin after 2008. Interestingly, states that had strong welfare systems have seen the least political realignment. As the contributors show, ordinary voters tend to vote based on their own experiences, and those in expansive welfare states have been buffered from the harshest effects of the Recession. That said, states with weaker welfare systems-e.g., Greece-have seen significant political turmoil. Moreover, there have been a small number of cases of popular radicalization, and the contributors have been able to isolate the cause: when voters can establish a clear and direct connection between the actions of political elites and economic hardship, they will throw their support to protest parties on the right and left. Ultimately, though, the picture is one of relatively stoic acceptance of the downturn by the majority of publics. Featuring an impressive range of cases, this will stand as the most comprehensive scholarly account of the Great Recession's impact on political behavior in advanced economies.
Toon meer Toon minder