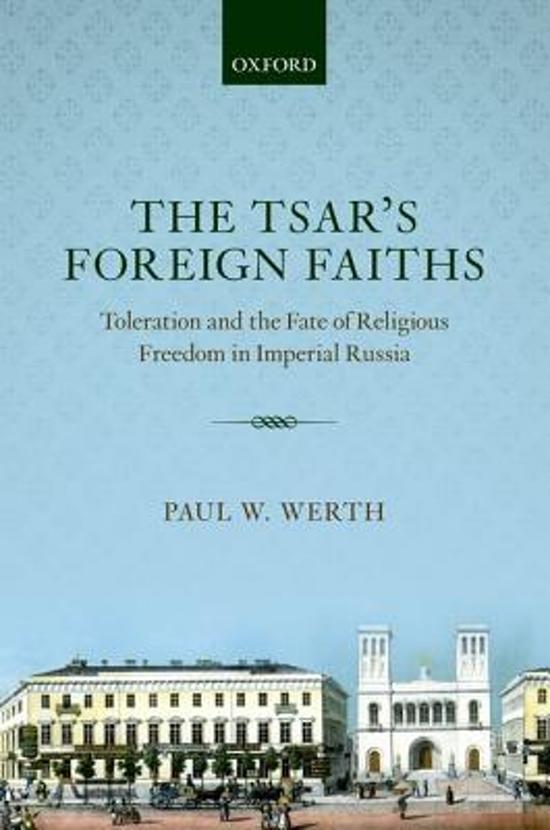 The Russian Empire presented itself to its subjects and the world as an Orthodox state, a patron and defender of Eastern Christianity. Yet the tsarist regime also lauded itself for granting religious freedoms to its many heterodox subjects, making 'religious toleration' a core attribute of the state's identity. The Tsar's Foreign Faiths shows that the resulting tensions between the autocracy's commitments to Orthodoxy and its claims to toleration became a defining feature of the empire's religious order. In this panoramic account, Paul W. Werth explores the scope and character of religious freedom for Russia's diverse non-Orthodox religions, from Lutheranism and Catholicism to Islam and Buddhism. Considering both rhetoric and practice, he examines discourses of religious toleration and the role of confessional institutions in the empire's governance. He reveals the paradoxical status of Russia's heterodox faiths as both established and 'foreign', and explains the dynamics that shaped the fate of newer conceptions of religious liberty after the mid-nineteenth century. If intellectual change and the shifting character of religious life in Russia gradually pushed the regime towards the acceptance of freedom of conscience, then statesmen's nationalist sentiments and their fears of 'politicized' religion impeded this development. Russia's religious order thus remained beset by contradiction on the eve of the Great War. Based on archival research in five countries and a vast scholarly literature, The Tsar's Foreign Faiths represents a major contribution to the history of empire and religion in Russia, and to the study of toleration and religious diversity in Europe.
Toon meer Toon minder

The Tsar's Foreign Faiths is a first-rate contribution to both imperial Russian and religious history. * Lucien J. Frary, Ab Imperio * Paul Werth is once again forcing us to rethink the Empire of the Tsars in a book that is well written, well researched, and well argued. Most of all, it is expertly thought out and meticulously plotted through a wealth of case studies that will inform and surprise. He disrupts our assumption that this was a regime of oppression plain and simple, and he shows this in the most sensitive of areas, religion. Rather this was a confused and complicated reality that negotiated religion between the two poles of tolerance and freedom of conscience ... Werth takes an exceptionally Russian story and makes it a recognizably modern one by giving us the tools to compare. This is the latest word in our ever-fascinating field of ethnicity, nationality, and confession * Yanni Kotsonis, Director, Jordan Center for the Advanced Study of Russia, New York University * In this intellectual, political, and administrative history of concepts and practices of religious toleration and religious freedom in Imperial Russia, Paul W. Werth provocatively argues that confessional institutions provided the crucial framework for the relationship between the Empire and its many subject peoples, and that historians have misread imperial Russian history by seeking to describe a nationality policy that was simply not there until the rise of modern nationalist ideas in the latter part of the nineteenth century. I can say with conviction that, with its important argument about the very nature of imperial governance, this book will be required reading for all students of imperial Russia and of religion and governance in modern Europe * Heather J. Coleman, Canada Research Chair in Imperial Russian History, University of Alberta * excellent ... The Tsar's Foreign Faiths is the wisest sustained discussion in any language of religious freedom in Russia * Slavic Review * Those teaching the history of Imperial Russia at university level would be well served by adding this work to their syllabus. Far from being a straightforward history of religion, Werth offers up a highly stimulating study that reveals a great deal about the Russian state's broad attitude towards toleration and freedom of conscience. More generally, anyone interested in the complex practices of imperial rule in Russia, beset as it was by tensions and contradictions, will gain many insights by reading The Tsar's Foreign Faiths. * Robert Collis, European History Quarterly *
Toon meer Toon minder