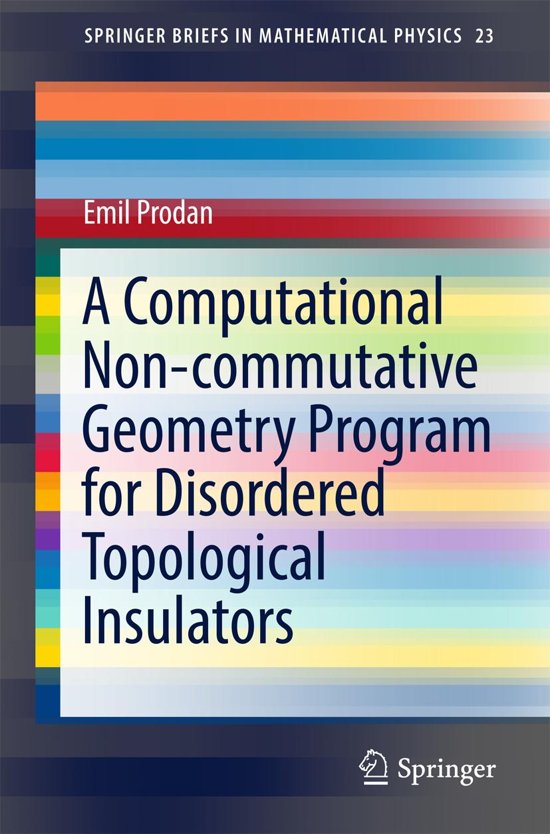 This work presents a computational program based on the principles of non-commutative geometry and showcases several applications to topological insulators. Noncommutative geometry has been originally proposed by Jean Bellissard as a theoretical framework for the investigation of homogeneous condensed matter systems. Recently, this approach has been successfully applied to topological insulators, where it facilitated many rigorous results concerning the stability of the topological invariants against disorder.


In the first part of the book the notion of a homogeneous material is introduced and the class of disordered crystals defined together with the classification table, which conjectures all topological phases from this class. The manuscript continues with a discussion of electrons' dynamics in disordered crystals and the theory of topological invariants in the presence of strong disorder is briefly reviewed. It is shown how all this can be captured in the language of noncommutative geometry using the concept of non-commutative Brillouin torus, and a list of known formulas for various physical response functions is presented.


In the second part, auxiliary algebras are introduced and a canonical finite-volume approximation of the non-commutative Brillouin torus is developed. Explicit numerical algorithms for computing generic correlation functions are discussed.


In the third part upper bounds on the numerical errors are derived and it is proved that the canonical-finite volume approximation converges extremely fast to the thermodynamic limit. Convergence tests and various applications concludes the presentation.


The book is intended for graduate students and researchers in numerical and mathematical physics.