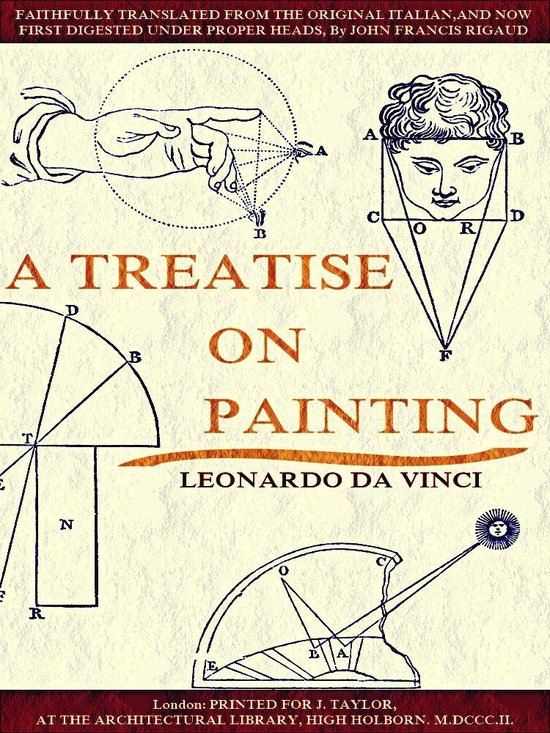 The excellence of the following Treatise is so well known to all in any tolerable degree conversant with the Art of Painting, that it would be almost superfluous to say any thing respecting it, were it not that it here appears under the form of a new translation, of which some account may be expected.
Of the original Work, which is in reality a selection from the voluminous manuscript collections of the Author, both in folio and quarto, of all such passages as related to Painting, no edition appeared in print till 1651, though its Author died so long before as the year 1519; and it is owing to the circumstance of a manuscript copy of these extracts in the original Italian, having fallen into the hands of Raphael du Fresne; that in the former of these years it was published at Paris in a thin folio volume in that language, accompanied with a set of cuts from the drawings of Nicolo Poussin, and Alberti; the former having designed the human figures, the latter the geometrical and other representations. This precaution was probably necessary, the sketches in the Author's own collections being so very slight as not to be fit for publication without further assistance. Poussin's drawings were mere outlines, and the shadows and back-grounds behind the figures were added by Errard, after the drawings had been made, and, as Poussin himself says, without his knowledge.
In the same year, and size, and printed at the same place, a translation of the original work into French was given to the world by Monsieur de Chambray (well known, under his family name of Freart, as the author of an excellent Parallel of ancient and modern Architecture, in French, which Mr. Evelyn translated into English). The style of this translation by Mons. de Chambray, being thought, some years after, too antiquated, some one was employed to revise and modernise it; and in 1716 a new edition of it, thus polished, came out, of which it may be truly said, as is in general the case on such occasions, that whatever the supposed advantage obtained in purity and refinement of language might be, it was more than counterbalanced by the want of the more valuable qualities of accuracy, and fidelity to the original, from which, by these variations, it became further removed.
The first translation of this Treatise into English, appeared in the year 1721. It does not declare by whom it was made; but though it professes to have been done from the original Italian, it is evident, upon a comparison, that more use was made of the revised edition of the French translation. Indifferent, however, as it is, it had become so scarce, and risen to a price so extravagant, that, to supply the demand, it was found necessary, in the year 1796, to reprint it as it stood, with all its errors on its head, no opportunity then offering of procuring a fresh translation.
This last impression, however, being now also disposed of, and a new one again called for, the present Translator was induced to step forward, and undertake the office of fresh translating it, on finding, by comparing the former versions both in French and English with the original, many passages which he thought might at once be more concisely and more faithfully rendered. His object, therefore, has been to attain these ends, and as rules and precepts like the present allow but little room for the decorations of style, he has been more solicitous for fidelity, perspicuity, and precision, than for smooth sentences, and well-turned periods.