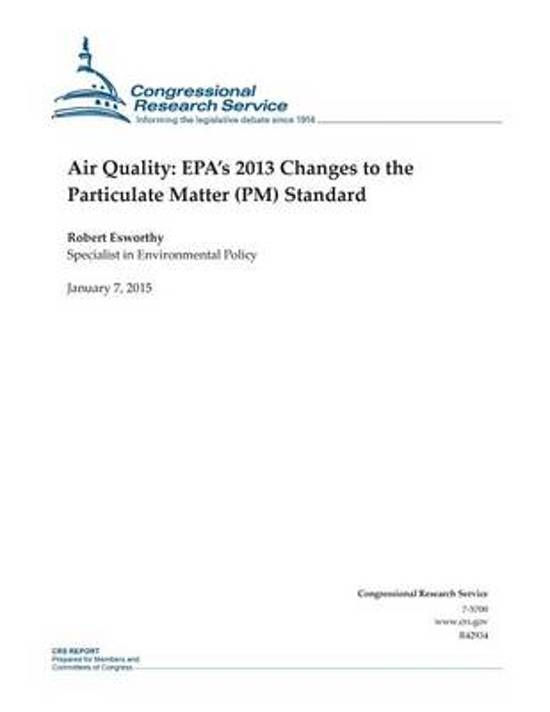 On January 15, 2013, the Environmental Protection Agency (EPA) published a final rule revising the National Ambient Air Quality Standard (NAAQS) for particulate matter (PM). The revised air quality standards were completed pursuant to the Clean Air Act (CAA) and, in part, in response to a court order and consent agreement. Based on its review of scientific studies available since the agency’s previous review in 2006, EPA determined that evidence continued to show associations between particulates in ambient air and numerous significant health problems, including aggravated asthma, chronic bronchitis, nonfatal heart attacks, and premature death. Populations shown to be most at risk include children, older adults, and those with heart and lung disease, and those of lower socioeconomic status. EPA’s review of and revisions to the PM NAAQS have generated considerable debate and oversight in Congress. The January 2013 revisions change the existing (2006) annual health-based (“primary”) standard for “fine” particulate matter 2.5 micrometers or less in diameter (or PM2.5), lowering the allowable average concentration of PM2.5 in the air from the current level of 15 micrograms per cubic meter (µg/m3) to a limit of 12 µg/m3. The annual PM2.5 NAAQS is set so as to address human health effects from chronic exposures to the pollutants. The existing “24-hour primary standard” for PM2.5 that was reduced from 65 µg/m3 to 35 µg/m3 in 2006 was retained, as was the existing standard for larger, but still inhalable, “coarse” particles less than 10 micrometers in diameter, or PM10. As it did in 2006, EPA set “secondary” standards that provide protection against “welfare” (nonhealth) effects, such as ecological effects and material deterioration, identical to the primary standards. EPA revised the Regulatory Impact Analysis (RIA) accompanying its June 2012 proposed rule in part in response to comments received regarding the agency’s cost and benefit estimates. In its December 2012 RIA, EPA estimated that the potential “quantifiable” health benefits (2010 $) associated with attaining the PM standard would range from $4.0 billion to $9.1 billion, and costs (2010 $) would range from $53.0 million to $353.0 million. Some stakeholders and some Members continue to express concerns that cost impacts would be more significant than those estimated by EPA for those areas out of compliance with the new standards. EPA’s revisions to the PM NAAQS do not directly regulate emissions from specific sources, or compel installation of any pollution control equipment or measures, but indirectly could affect operations at industrial facilities and other sources throughout the United States. Revising PM NAAQS starts a process that includes a determination of areas in each state that exceed the standard and must, therefore, reduce pollutant concentrations to achieve it. Following determinations of these “nonattainment” areas based on multiple years of monitoring data and other factors, state and local governments must develop (or revise) State Implementation Plans (SIPs) outlining measures to attain the standard. These include promulgation of new regulations by states, and the issuance of revised air permits. The process typically takes several years. As per statutory scheduling requirements, on December 18, 2014, EPA classified 14 areas as “Moderate” nonattainment for the revised 2013 primary annual PM2.5 standard. The areas include 38 counties or portions of counties in six states—California, Idaho, Indiana, Kentucky, Ohio, and Pennsylvania. EPA also deferred the designation period for 11 other areas by up to one year, and designated all other areas as “unclassifiable” or as “unclassifiable/attainment.” CAA section 188(c) requires Moderate areas to achieve attainment as expeditiously as practicable, but no later than six years after the effective date of final area designation.
Toon meer Toon minder