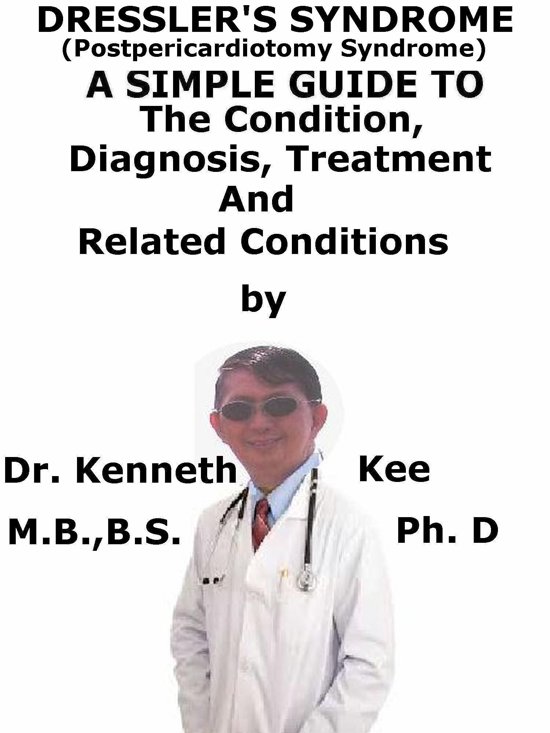 Dressler's syndrome (or postpericardiotomy syndrome) is classified as a form of pericarditis, inflammation of the sac surrounding the heart.
The inflammation is thought to be a response of the immune system after a traumatic injury or damage to the heart tissue such as from a heart attack or open heart surgery.
Dressler's syndrome is less frequent that it used to be
Two forms of pericarditis can happen after a heart attack:
Early pericarditis:
This is a disorder that normally happens within 1 to 3 days after a heart attack.
When the body attempts to clean and heal the diseased heart tissue, swelling and inflammation happen.
Late pericarditis (Dressler's syndrome)
This is a disorder that normally happens several weeks or months after a heart attack, open heart surgery, or other chest trauma
Dressler's syndrome is thought to be caused by the immune system wrongly attacking healthy heart tissue.
This is customary a post-myocardial infarction syndrome, normally happening two to five weeks after the early event but it can be delayed for as long as three months.
Dressler's syndrome has typical features such as:
1. Pleuritic chest pain,
2. Low-grade fever and
3. Pericarditis (autopsy shows localized fibrinous pericarditis), together with pericardial effusion.
It is likely to follow a benign medical course.
Dressler's syndrome has been observed after heart surgery, percutaneous intervention, pacemaker implantation, radiofrequency ablation and pulmonary vein isolation
Causes
When the heart tissue is injured, the body responses to damaged tissue by sending immune cells and proteins called antibodies to clean and heal the injured area
Occasionally the reaction from the immune system produces excessive inflammation in the sac surrounding the heart, producing Dressler's syndrome.
Risk factors
If a person has had a prior episode of Dressler's syndrome, it is more likely to occur again.
It appears more likely to happen after a large infarct.
Symptoms
Symptoms of Dressler's syndrome tend to occur 2-5 weeks or three months after a heart attack, open heart surgery or other chest trauma.
It normally manifests two to five weeks after the early episode, with pain and fever that may indicate further infarction.
The pain is the primary symptom, often in the left shoulder, often pleuritic, and worse on lying down.
There may be fatigue, fever and shortness of breath.
Infrequently, it may induce cardiac tamponade or acute pneumonitis.
The sound of pericardial friction rub may be heard with the stethoscope.
The normal sound of pericarditis is expressed as like the sound of boots walking over fresh snow.
Diagnosis
Dressler's syndrome is diagnosed by the presence of:
Postcardiotomy pleuritic chest pain,
Low-grade fever and pericarditis
Serology may show heart autoantibodies.
ECG may show ST elevation in most leads without reciprocal ST depression, typical of pericardial effusion.
Echocardiography shows pericardial effusion.
MRI scan may show an effusion and, recently, has been shown to reveal pericardial involvement
CXR shows pleural effusions in 83%, parenchymal opacities in 74%, and an enlarged cardiac silhouette in 49%.
Treatment
1. Aspirin may be given in large doses.
2. Other non-steroidal anti-inflammatory drugs (NSAIDs) or corticosteroids may be given, particularly if there are severe and recurrent symptoms.
3. Steroids are especially valuable where severe symptoms require pericardiocentesis, and when infection has been ruled out.
In resistant or repeat occurrences, colchicine may be helpful.
If there is considerable pericardial effusion, then pericardiocentesis, requiring aspiration of the fluid, may be needed to alleviate the constriction on the heart.
TABLE OF CONTENT
Introduction
Chapter 1 Dressler's Syndrome
Chapter 2 Causes
Chapter 3 Symptoms
Chapter 4 Diagnosis
Chapter 5 Treatment
Chapter 6 Prognosis
Chapter 7 Pericarditis
Chapter 8 Coronary Heart Disease
Epilogue