Mary, Mary Quite Contrary Does The Lord Jesus Want Women To Rule As Elders In His Church ? 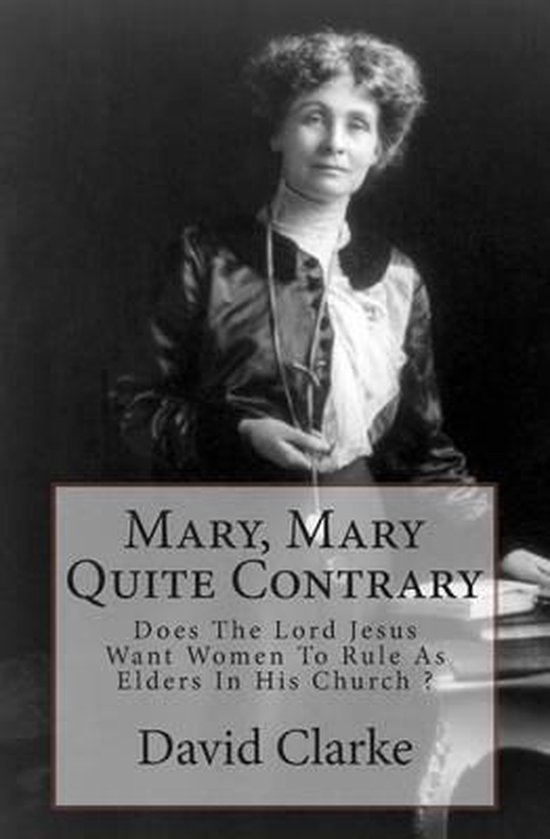 This is a true story telling how David Clarke, the author, encountered opposition from the elders of a church, in England who were intent on appointing women as elders. David believed this was wrong and clearly going against the word of God. The New Testament forbids a woman from teaching and being appointed as an elder in a church, with good reason this is not chauvinism but the wisdom of God. It is hoped this book will be a help to many. We live in a day of rank apostasy. That apostasy is not limited to the unbelieving world because much of it is accepted by the Christian world. David Clarke hits head on one of the tenets of the apostasy which has exploded internationally. A time like this had been prophesied by Isaiah. Isaiah 3:12 (KJV) As for my people, children are their oppressors, and women rule over them. O my people, they which lead thee cause thee to err, and destroy the way of thy paths. The tenet which David Clarke hits head on is the one of women preachers and women elders in the churches. Isaiah states that women were ruling over the people of God, when the men should have been in leadership roles. The Scripture states that “they which lead thee cause thee to err.” In this book you will find a confrontation between elders and the word of God. When church leaders neglect the truths of Scripture and base everything they believe on as their “personal opinion“, then the paths have been destroyed for the Christian, as Isaiah teaches. One of the outgrowths of the charismatic movement, is the teaching that women are just as qualified as men to be elders and pastors. This is not to say that women are lacking leadership qualities but the Bible is very clear that they are not to rule over men and are not to have rule in the churches. It is unfortunate that many feminized men in the church kowtow behind the concept that disallowing women rule in the churches is not showing them love. The reality is that being disobedient to the commands of Scripture is nothing more than rebellion against God. 1 Samuel 15:3 speaks about rebellion being as the sin of witchcraft. God has given specific instructions concerning the churches and their structure and who are we to claim that we know more than God. The deep apostasy which many churches have accepted is made visible in this book but not only churches, Bible colleges have also acquiesced to disobeying the Bible and have endorsed women rulers in the church. It is a shame that those who bring the truth are considered the troublemakers in the churches. Tell me, what kind of love do you show someone when you actually help them to be disobedient to God? Will they still love you when they are in hell paying for their sins of rebellion? It is time for Christian men to step up and be men. 1 Corinthians 16:13 (KJV) Watch ye, stand fast in the faith, quit you like men, be strong. This book needs to be in the library of all Christians to help them oppose the incursion of women rulers in the church. It is still not too late to bring about a repentance on the part of church leaders for allowing themselves to be swayed by false teaching. A strong church obeys God, a weak and dying one disobeys God, regardless of how many attend. (This is the foreword by Dr. Ken Matto)Scion of Zion Internet Ministrywww.scionofzion.com
Toon meer Toon minder