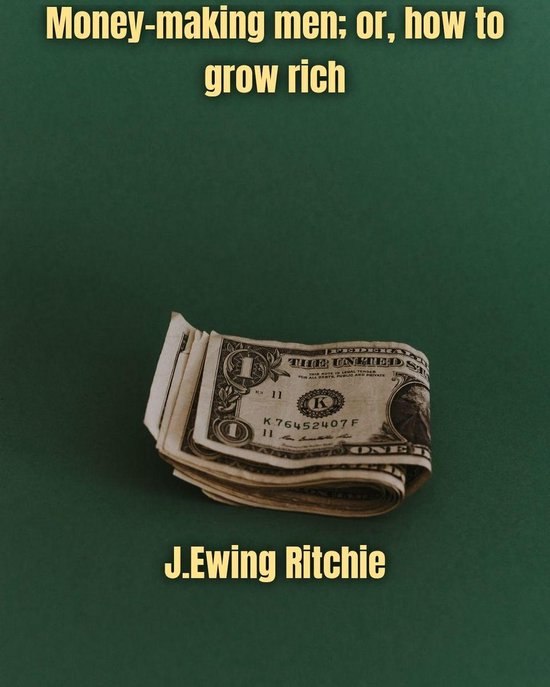 Money-making men; or, how to grow rich

A Fortune made by a Vegetarian

A Fortune made by Teetotalism

Money-making Men in the Provinces


I FEAR City people are very mercenary in their views and habits. It is natural that they should be so; they come into the City to make money, and that is all they are thinking of while they are there. They do not all succeed in their attempt, I know. Some are idle and improvident, and do not deserve to win in the battle of life. They are failures from their birth, and go mooning about like the immortal Micawber, expecting something to turn up, till death comes and puts an end to their expectations. Some men are unlucky, and lose by every adventure; others are born lucky, and, from no merit of their own, everything they touch turns to gold. The other day a poor costermonger was run-over in the street and killed, and it was found that he was worth several hundreds of pounds. It would be interesting to know how a costermonger could have made all that money by the sale of apples, oranges, and greens. A few weeks since I heard a distinguished judge tell an audience, consisting of school-boys, that in his own person he was an illustration of the fact that, in this happy England, any one, however destitute of rank and wealth and connections he might be, would rise to the position to which his worth entitled him; and he ended with the recommendation of the wise man of old, "In all thy ways acknowledge Him, and He will direct thy paths." Only a month since I heard of the death of a Jew, who had commenced with selling pencils in the street, and had died worth a million of money. How was it done? Ah! that's the question. It is not done, as a rule, by the speculators; nor is it done by the rogues who forget that honesty is the best policy. Many of the men who have succeeded, it has been remarked, have generally achieved success by the application of some very simple principle which they have established as the general rule of their proceedings.

Ricardo said that he had made his money by observing that, in general, people greatly exaggerated the importance of events. If, therefore, dealing, as he dealt, in stocks, there was reason for a small advance, he bought, because he was certain that an unreasonable advance would enable him to realise; and when stocks were falling he sold, in the conviction that alarm and panic would produce a decline not warranted by circumstances.

Let us take another case—that of Rothschild, the third son of the Frankfort banker, who came to England with £2,000, which he soon turned into £60.000. "My success," he said to Sir Thomas Fowell Buxton, "all turned on one maxim: I said, I can do what another man can. Another advantage I had, I was an off-hand man. I made a bargain at once. When I was settled in London, the East India Company had £800,000 worth of gold to sell. I went to the sale and bought it all. I knew the Duke of Wellington must have it. I had bought a great many of his bills at a discount. The government sent for me, and said they must have it. When they had got it, they did not know how to get it to Portugal. I undertook all that, and I sent it through France; and that was the best business I ever did." Another rule of his was never to have anything to do with unlucky men. "I have seen," said he, "many clever men—very clever men—who had not shoes to their feet. I never act with them. Their advice sounds very well, but fate is against them; they cannot get on themselves; and if they cannot do good to themselves, how can they do good to me?" His advice to Sir Thomas's son was sound: "Stick to your business, young man; stick to your brewery, and you may be the great brewer of London. Be a brewer and a banker, and a merchant and a manufacturer, and you will soon be in the Gazette." How true this is, any one who has the slightest acquaintance with City life can at once understand. The advice should be printed in gold in every counting-house in London. If it were, and were acted on as well, we should hear of fewer commercial failures.

Let me give another anecdote of the Rothschilds. It is related of Baron Nathan de Meyer, that on one occasion he gave a lady the following pithy piece of advice. Seated at the dinner-table, she informed him she had an only son, whom she was anxious to see placed well in business, and begged him to give her a hint on the subject. For a long time the baron hesitated; and at length, when urged by the lady, half good-naturedly and half worried, he turned round and said—"Well, madam, I will tell you. Selling lucifer-matches is a very good business if you have plenty of it."

In his "Autobiographical Recollections," Sir John Bowring thus speaks of the celebrated Morrison, the founder of the great commercial house in Fore Street:—"Morrison told me that he owed all his prosperity to the discovery that the great art of mercantile traffic was to find out sellers, rather than buyers; that if you bought cheap and satisfied yourself with only a fair profit, buyers—the best sort of buyers, those who have money to buy—would come of themselves. He said he found houses engaged, with a most expensive machinery, sending travellers about in all directions to seek orders and to effect sales; while he employed travellers to buy instead of to sell; and if they bought well, there was no fear of his effecting advantageous sales. So, uniting this theory with another, that small profits and quick returns are more profitable in the long run than long credits with great gains, he established one of the largest and most lucrative concerns that has ever existed in London, and was entitled to a name which I have often heard applied to him, "the Napoleon of Shopkeepers.'" Mr. James Morrison, the founder of the Fore Street warehouse, certainly deserves further record. He was a native of Hants, and born of Scotch parents. Early transplanted to the metropolis at the end of the last century, the country youth first set foot in London, unaided in search of fortune. His first employment was a very menial one in a warehouse, and procured him a bare maintenance; but his industry and trustworthiness soon secured him a partnership in the Fore Street business of the late Mr. Todd, whose daughter he married. So far it may be said that his rise was accidental; but his constant rise was no accident. His enormous wealth was the result of his own natural sagacity.