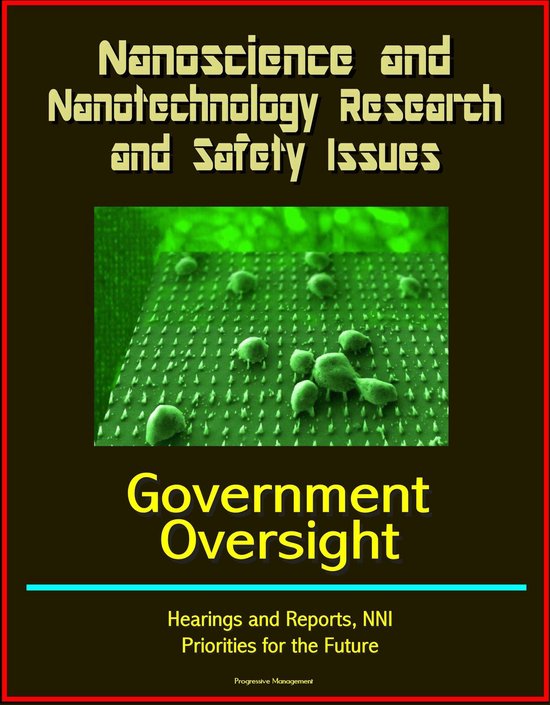 Congressional hearings and GAO reports provide a great overview of the National Nanotechnology Initiative (NNI) and government regulation of environmental, health, and safety issues about nanomaterials.


Nanotechnology has the potential to profoundly change our economy and improve our standard of living, in much the same way as information technology advances have revolutionized our lives and the economy over the past two decades. While some nanotechnology products are beginning to come to market, many major applications for nanotechnology are still 5-10 years away. Private investors look for short-term returns on investment, generally in the range of 1-3 years. Consequently, Government support for nanotechnology research and development in its early stages is required to ensure that the United States can maintain a competitive position in the worldwide nanotechnology marketplace while realizing nanotechnology's full potential. Increasing investments in nanotechnology R&D by NNI participating agencies also reflect the potential for this research to support diverse agency missions and responsibilities. This funding has a remarkable return on investment when viewed in terms of expected job creation and the potential for significant economic growth. As mentioned earlier, a study funded by the National Science Foundation projects that 6 million nanotechnology workers will be needed worldwide by 2020, with 2 million of those jobs in the United States. Multiple sources have come to the conclusion that nanotechnology-enabled products will be valued at up to $3 trillion by the end of the decade . Nanotechnology will continue to create many jobs requiring college degrees and higher education, but it also will create jobs that can be filled through training and vocational programs, including community colleges and two-year degrees. In fact, many nanotechnology companies report that they are hiring Ph.D.s for routine characterization jobs, which could be more suitably filled by skilled technicians. In response to this growing need, community colleges across the country are launching nanotechnology programs, with currently around 60 such programs nationwide. Federal investments also mirror the efforts being made through regional, state, and local nanotechnology initiatives across the country. Since the inception of the NNI, a number of highly successful regional and state initiatives have been developed in the U.S. and continue to thrive today. There are currently more than 30 active regional, state, and local nanotechnology initiatives in the U.S. , many of which participated in a 2009 NNI workshop on regional programs. The consensus at the workshop was clear: regional and state initiatives are counting on the leadership of the NNI to help drive a nationwide effort in nanotechnology.


The Federal Government does not single out any particular fields of science and engineering or industries that are most likely to benefit from the nanotechnology advances. However, in a study commissioned by the NNI, Lux Research has identified four industry sectors most likely to be impacted by nanotechnology in the near term:


• Advanced healthcare and pharmaceutical applications, which are slowly entering the market


• The transportation sector—including automotive, airplane, and shipping— which offers a huge potential for nanotechnologies, particularly nanotechnology-enabled composites and electrical materials


• Manufacturing, industrial materials, and consumer products (including everything from nanotechnology-enabled lubricants to nanoporous insulation to carbon nanotube-reinforced fishing rods)


• The electronics industry, which highlights some of the most broadly adopted nanotechnology-enabled products and processes, and where long-term research is underway (in close cooperation with the NNI) that could enable major new advances that are a decade or more away.