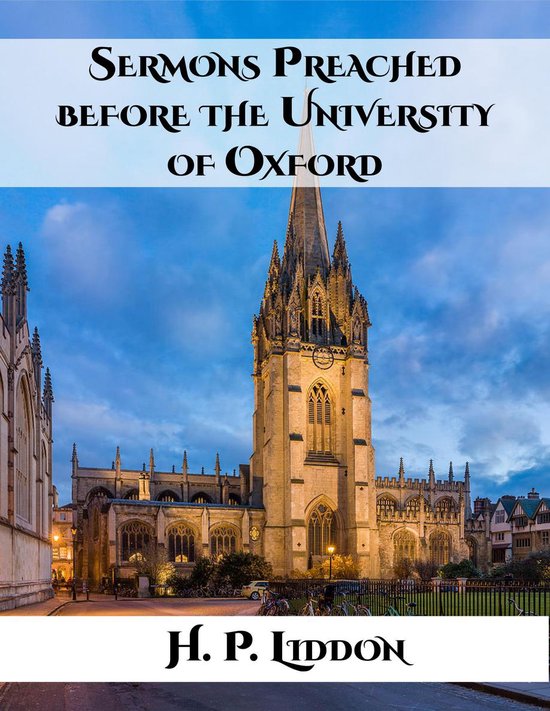 The Sermons contained in this volume have little in common with each other beyond a certain apologetic character, such as is suggested by the titlea. At one time the writer had intended to employ the opportunities afforded to him during the course of the last two years, in an attempt to show that some prominent ideas, which, in their application to secular and material interests, form the strength and staple of the system or complexion of thought vaguely described as "Liberalism," are originally traceable, directly or indirectly, to a Christian source, and are realized by none so completely as by the faithful children of the Church. This intention is here alluded to, in the hope that some one else may be led to consider the subject, and, if expedient, to discuss it in the University pulpit or elsewhere. The Sermons which stand as second and third in this publication are a partial, but only a partial attempt to follow it out. The plan of attempting any thing like a course of Sermons was abandoned in deference to what seemed to be a higher duty in a Christian Preacher, that, namely, of dealing as well as he can with such misapprehensions respecting truths of faith or morals as he knows to be actually current among those whom he has to address.


The reader will bear in mind that this is a volume of Sermons. It makes no pretension to be a volume of Essays. An Essay belongs to general literature: a Sermon is the language of the Church. A Sermon is confined within narrow limits; and its necessarily rhetorical character renders an economical use of its scanty opportunities impossible. Each Sermon must suggest many topics which it cannot afford to discuss. And so far are any Sermons in this volume from professing to deal exhaustively with the subjects of which they treat, that they are purposely restricted to those particular points which happened at the time of their delivery to excite interest or to cause difficulties among persons with whom the Preacher was more or less acquainted. Some great omissions will at once occur to every reader. For instance, the real office and capacity of the Moral Sense—as on the one hand predisposing us to faith in Our Lord, from its perception of the Beauty of His Character, and as being, on the other, itself educated and controlled by the truths which He authoritatively discloses to it—is not entered upon in those Sermons which insist upon the claims of dogmatic truth. Again, the connexion between the Atonement and the Eucharist is not mentioned in the Sermon for Good Friday: although the text of that Sermon might naturally have suggested it, and so precious a truth was by no means forgotten.