So Pretty... So Many Tears 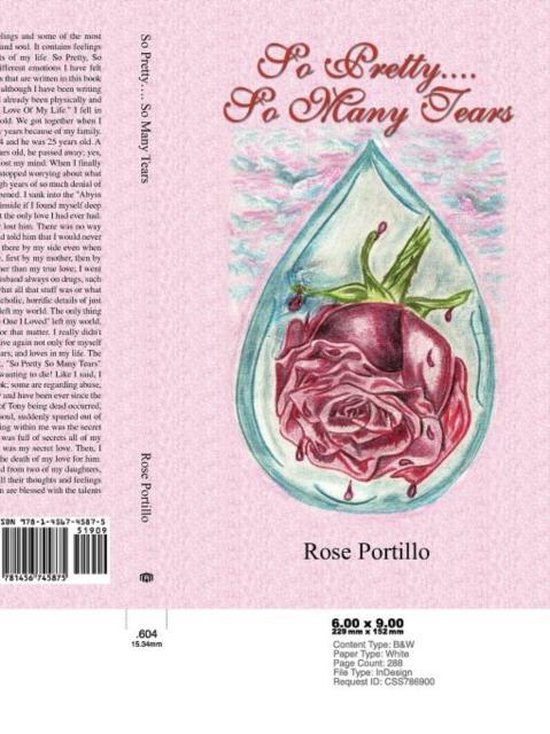 
sadness out of the depths of my heart and soul. It contains feelings


from different times and many events of my life. So Pretty, So


Many Tears has poems from many different emotions I have felt


throughout my life. Some of the poems that are written in this book


were written when I was 16 years old, although I have been writing


since I was much younger, when I had already been physically and


emotionally abused! Then I lost ''The Love Of My Life.'' I fell in


love with Tony when I was 12 years old. We got together when I


was 16 and then we separated for a few years because of my family.


couple of days before he turned 27 years old, he passed away; yes,


my family felt about him. Ever since then I have been truly going through years of so much denial of


his death, self conviction and guilt over what happened and how it happened. I sank into the ''Abyss


of my empty soul,'' and I didn't want to be found because I knew deep inside if I found myself deep


within my secretly wounded heart, I would realize and find out that I lost the only love I had ever had.


He was my only friend and I knew that I would lose my mind if I ever lost him. There was no way


that I wanted to live in this ugly world without him by my side, and I had told him that I would never


be afraid of anything not even the end of the world, so long as he was there by my side even when


the end of the world was occurring. I have been abused most of my life, first by my mother, then by


my older brother, then later on when I got married to someone else other than my true love; I went


through some inner hell tortures as well as physical tortures, with my husband always on drugs, such


as heroine, crystal meth, and crack cocaine; when I didn't even know what all that stuff was or what


it did to someone. Anyhow, the book contains all of my dreadful, melancholic, horrific details of just


how much I had lost my mind. For I truly did lose my mind when Tony left my world. The only thing


I had to stay alive for was my children that I already had and when ''The One I Loved'' left my world,


I went insane but I didn't even know it, and neither did anyone else for that matter. I really didn't


know how to handle living life without Tony. I needed to learn how to live again not only for myself


but for my children, and the book does indeed hold the deepest fears, tears, and loves in my life. The


book contains so many feelings tears and love and as one person put it, ''So Pretty So Many Tears''


when the tears wouldn't stop and how I couldn't stop thinking of and wanting to die! Like I said, I


actually really lost my mind. There are many different poems in this book; some are regarding abuse,


death, love, reincarnation and even living with physical pain as I do now and have been ever since the


year of 2001; it seems as if once the denial stopped and the admission of Tony being dead occurred,


the pain and suffering I had secretly been feeling in my heart and my soul, suddenly spurted out of


me and showed and was now felt physically. For the secret I was holding within me was the secret


I withheld even from my own self and that was that Tony was dead. I was full of secrets all of my


life, first I held the secret from my family the love I had for Tony; he was my secret love. Then, I


There are also some poems from my granddaughter Vanessa Espitia and from two of my daughters,


Desiree Grace and Princess Anna, both of whom I encourage to write all their thoughts and feelings


from their heart, if that is what they want to do. Most of my 12 children are blessed with the talents


of writing and art; along with some of my grandchildren.