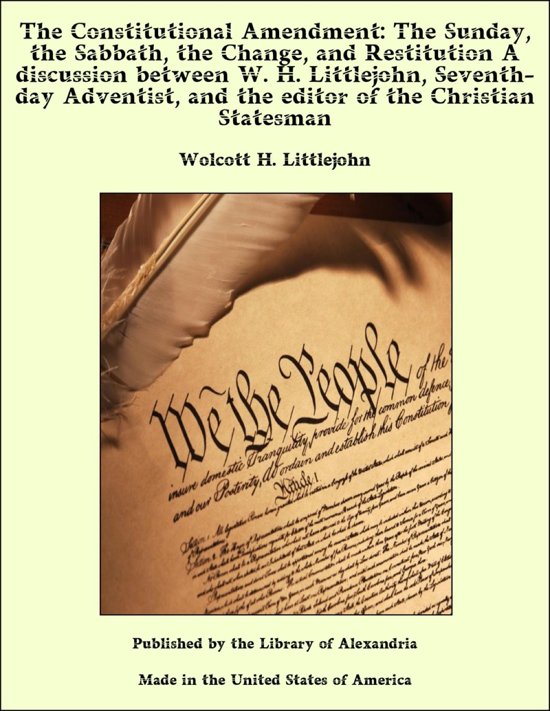 One of the marked features of our time is the tendency toward the discussion of the Sabbath question. Nor can this subject be treated with more indifference in the future than it is at the present. Agitation, ceaseless, unrelenting, excited, and finally severe, is rendered certain by the temper of all the parties to the controversy. On the one hand, the friends of Sunday observance are dissatisfied with the laxity of the regard which is paid it, and are loud in their demands for statutory relief; denouncing upon the nation the wrath of God, in unstinted measure, should their petition be set at naught. On the other hand, the enemies of the Sabbath institution, in all of its phases, are becoming bold in their protestations against a legalized Sabbath, as something extremely oppressive and inexpressibly intolerable in its very nature. In all parts of the country, activity characterizes the camps of both these contending hosts. Everywhere the elements of strength—hitherto unorganized, and inefficient to the accomplishment of great results because of that fact—are being brought out and employed in effective service. Cincinnati, Chicago, New York, Boston, San Francisco, in their turn, become the theaters where the skirmish lines of future combatants, on a larger scale, are brought into occasional collision. The ordinary appliances of dinners, processions, national and State conventions, city, town, and district societies, are rapidly becoming the order of the day, while those who are brought within the range of their influence are stimulated and aroused, on the one hand, by earnest appeals to the Bible and religion, and on the other, to natural rights and individual conscience. So far has the matter now proceeded, so much has already been said, so fully has the contest been opened, that retrogression means defeat to either the one or the other party. And as to compromise, this can never be attained, from the fact that the position from which both parties are now seeking to emerge is that of toleration. Why, says the ardent advocate of the Sunday law, it is not sufficient that I observe the day of rest with strictness and fidelity in my own family. I owe a duty to the public; I am a member of a great Commonwealth, which God treats as a personality, and if I do not see to it that the statute laws of the land are in harmony with, and enforce the requirements of, the law of God, this nation, like all others which have ignored their obligation to legalize and enforce his will in matters of this nature, will be devoted to a ruin for which I shall be accountable, and in which I shall be a sharer. Moved by such considerations as these, his purse is open and his labors untiring for the accomplishment of that which now appears to him to be in the line of both individual interest and religious duty. Again, his neighbor across the way being, perhaps, of the free-thinking order, and an ardent admirer of the complete separation of Church and State, wonders that he has so long consented to that abridgment of his personal liberty which has been made by statutory provision, and which has hitherto compelled him to surrender much of what he calls natural right to the whims and caprices of those with whom he differs so widely on all questions bearing upon the relation of man to his God. Henceforth, says he, I pledge my means, my influence, and my untiring effort, to a revolution which, if need be, shall shake society to its very center, rather than to consent to the legalized perpetuation of an institution which requires on my part an acknowledgment of a faith which I have never held, and of doctrines which I detest. Of course, all do not share alike, either in the enthusiasm or the animosity which characterizes certain individuals when entering upon a conflict like the one in question. In every party is found more or less of the aggressive and the conservative elements.