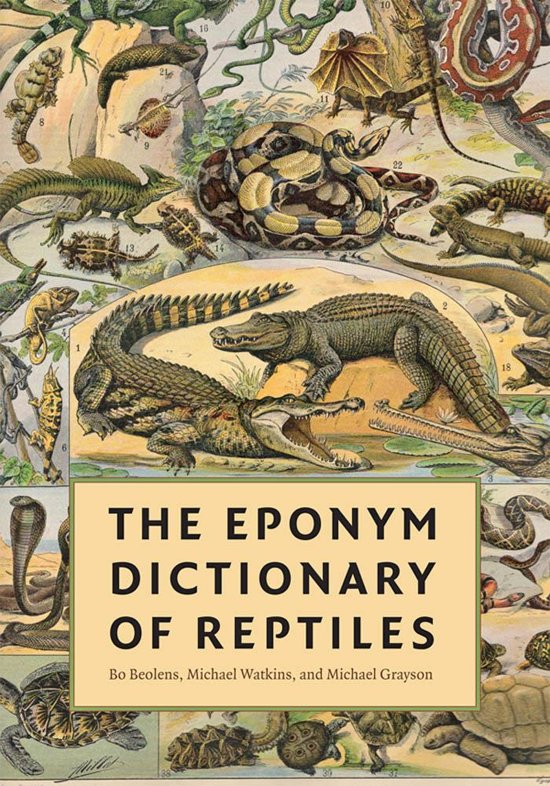 Who was Richard Kemp, after whom the Kemp's ridley sea turtle is named? Is Wake's Gecko named after Berkeley's Marvalee Wake? Or perhaps her husband, David? Why do so many snakes and lizards have Werner in their name? This reference book answers these and thousands of other questions about the origins of the vernacular and scientific names of reptiles across the globe.


From Agkistrodon piscivorus conanti, the Florida cottonmouth subspecies named for Roger Conant, to Xantusia, the night lizard genera namesake of John Xantus, this dictionary covers everyone after whom an extant or recently extinct reptile has been named. The entries include a brief bio-sketch, a list of the reptiles that bear the individual's name, the names of reptiles erroneously thought to be associated with the person, and a summary of major—and sometimes obscure or even incidental—contributions made by the person to herpetology and zoology. An introductory chapter explains how to use the book and describes the process of naming taxa.


Easy to use and filled with addictive—and highly useful—information about the people whose names will be carried into the future on the backs of the world's reptiles, The Eponym Dictionary of Reptiles is a handy and fun book for professional and amateur herpetologists alike.

Easy to use and filled with addictive-and highly useful-information... The Eponym Dictionary of Reptiles is a handy and fun book for professional and amateur herpetologists alike. -- Ian Paulsen * Birdbooker Report * Investigates the person behind the names attached to many reptiles... A fun and interesting book for herpetologists and students wanting to know the backgrounds of the pioneers in their field. * Wildlife Activist * The Eponym Dictionary of Reptiles does precisely what it says on the box. It's a dictionary of names appended in various species of reptiles, contemporary and recently extinct alike, with a brief overview of the discoverer and the namesake (since one isn't necessarily the other), plus a list of all that person's eponymous species... A remarkably fun book for dipping into or to skate through looking for notable names. -- Andrew P Street * Time Out Sydney * This dictionary provides concise information on the 2,330 persons who have had reptiles named after them... An interesting, informative, and easy-to-read book. -- Edmund D. Keiser, Jr. * American Reference Books Annual * Beolens and co-authors have produced a great book that is fun to read. Notably, they have already published similar books on birds and mammals... and reportedly have a companion volume on amphibians in press. If they live long enough to work through the 30,000 species of fish, a future eponym dictionary of vertebrates may keep saving biologists from buying People magazine for years to come. * Herpetological Review * It will be useful in all biological collections as the most convenient reference on the subject. * Choice * Should you buy it? If you're fascinated with the human dimensions of biodiversity, probably; if you're also a logophile, absolutely. -- Tom Herman * Canadian Herpetologist * [An] interesting, humorous, and stimulating book. -- Alan R. Kabat * Archives of Natural History * I think that the authors are to be congratulated for the effort that they have put into these books, and for the apparent scrupulousness with which they have pursued their goals. An immense amount of research has gone into the work, tracking down obscure references and re-checking data from the original sources. -- David A. Morrison * Systematic Biology *
Toon meer Toon minder