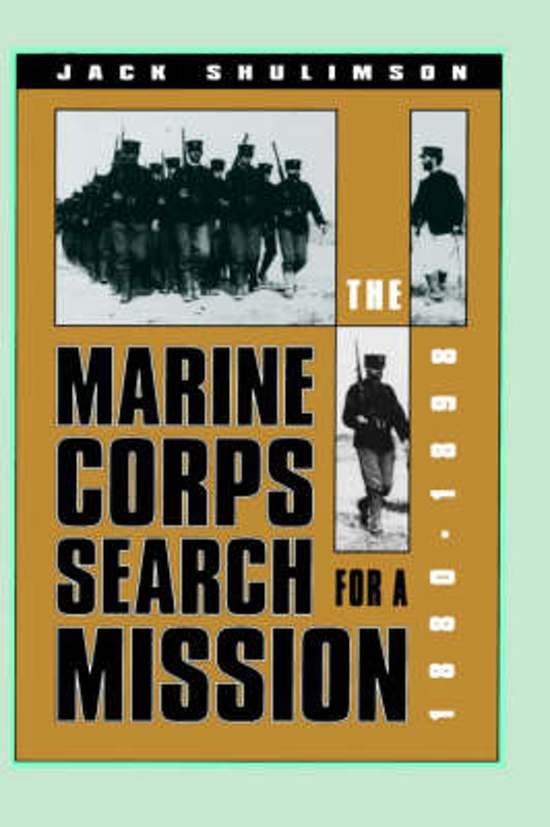 Heirs to a storied past and glamorized as modern-day knights, the Marine Corps - the elite fighting force in America's military - in fact has not always been so highly regarded. As Jack Shulimson shows, only a century ago the Corps' identity and existence were much in question.
Although the Marines were formally established by Congress in 1798 and subsequently distinguished themselves fighting on the Barbary Coast, their essential mission and identity remained unclear throughout most of the nineteenth century. In this enlightening study, Shulimson argues that the Marine Corps officers' inextricable ties to the Navy both hampered and aided their attempt to define their own special jurisdiction and professional identity. He reveals the processes, politics, and personalities that converged to create tense relations before Marine officers (with the Navy's blessing) eventually transcended their second-class role.
Toon meer Toon minder

The definitive study of the Gilded Age Marine Corps. --Allan R. Millett, author of Semper Fidelis: The History of the U.S. Marine Corps A lively recounting of the formative years of the modern Marine Corps. This book will be of interest and value to all historians of the United States Navy and Marine Corps and can be read with profit as well by anyone concerned with the process of modernization in late nineteenth-century America. --Graham A. Cosmas, coauthor of The U.S. Marines in Vietnam: Vietnamization and Redeployment, 1970-1971 No other book is as detailed or enlightening on the question of the evolution of Marine Corps professionalism. . . .Includes some fascinating descriptions of Marine Corps life. --Carol Reardon, author of Soldiers and Scholars: The U.S. Army and the Uses of Military History, 1865-1920 A fascinating look at one of those times when the Marine Corps struggled to exist. --Parameters [Shulimson] has produced a narrative that is very readable and an important contribution to the history of the Marine Corps. --Journal of Military History A model monograph, intensively researched and intelligently argued. Military historians will obviously find it valuable, but so should all students of institutional change. --Public Historian An important addition to the literature on military professionalism as well as a fine contribution to the history of the United States Marine Corps. --Journal of American History Will become known as the standard history for these critical 18 years when the Corps' 20th century mission was first conceived and demonstrated. --Marine Corps Gazette A fine account of the struggle to create the modern US Marine Corps. --Choice
Toon meer Toon minder