The Old Dominion or a Tale of Virginia 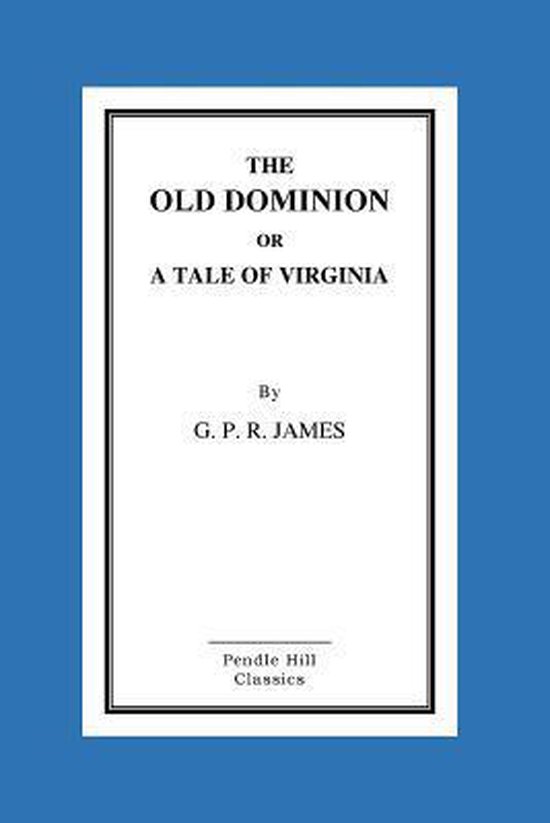 GEORGE PAYNE RAINSFORD JAMES, Historiographer Royal to King William IV., was born in London in the first year of the nineteenth century, and died at Venice in 1860. His comparatively short life was exceptionally full and active. He was historian, politician and traveller, the reputed author of upwards of a hundred novels, the compiler and editor of nearly half as many volumes of letters, memoirs, and biographies, a poet and a pamphleteer, and, during the last ten years of his life, British Consul successively in Massachusetts, Norfolk (Virginia), and Venice. He was on terms of friendship with most of the eminent men of his day. Scott, on whose style he founded his own, encouraged him to persevere in his career as a novelist; Washington Irving admired him, and Walter Savage Landor composed an epitaph to his memory. He achieved the distinction of being twice burlesqued by Thackeray, and two columns are devoted to an account of him in the new "Dictionary of National Biography." Each generation follows its own gods, and G. P. R. James was, perhaps, too prolific an author to maintain the popularity which made him "in some ways the most successful novelist of his time." But his work bears selection and revival. It possesses the qualities of seriousness and interest; his best historical novels are faithful in setting and free in movement. His narrative is clear, his history conscientious, and his plots are well-conceived. English learning and literature are enriched by the work of this writer, who made vivid every epoch in the world's history by the charm of his romance. Picking up a novel by the historical novelist G. P. R. James, with Virginia as subject and "The Old Dominion" for title, one inevitably expects a romance about Elizabethan adventures and noble savages, something after the manner of Fenimore Cooper, with an air of greater antiquity. What, then, is our surprise to find that the veteran romancer has given us a novel of recent history, with facetious sketches of Yankee oddities, a plot based on a legal imbroglio, and a painstaking study of that perennial problem, the negro question. "The Old Dominion" is, in fact, James's "American Notes" and "Martin Chuzzlewit," though the portraiture is altogether kindly, and the satire of the mildest kind. He has observed the life and manners of the country where he resided as British Consul with the same minute care as that which he lavishes on his historical studies. Without Dickens's virulent and entertaining comedy, the picture of life in Virginia in the thirties is probably far truer because of this scrupulous accuracy, and because of the moderation and patient endeavour to decide justly upon disputed points. Years before "Uncle Tom's Cabin," James gave the English public this thoughtful picture of slavery. He is not one-sided. He rather discloses at once the evils of slavery and the difficulties of emancipation in a purely imaginative way without pleading strongly for a remedy. He shows powerfully what a terrible retribution has been brought upon the land by those who introduced slavery. The negro's insane ferocity when freed from control, and the peril of a small white population at the mercy of a host of revolted slaves, are brought out in the history of the negro insurrection, which is traced from its origin in the preaching of McGrubber and the misguided brooding of Nat Turner, down to its repression. The hero and heroine and the love romance, with its profusion of obstacles to happiness, are the familiar ones, with a modern instead of a medi[ae]val environment. But the vivacity of the style is quite unusual. Mr. Byles is epigrammatic with his three distinctions between the North and the South. "In the South they fight duels whenever they can, have slaves for their servants, and grow tobacco and corn. In New England they never fight if they can help it, are slaves to their own servants, and make wooden clocks and wooden nutmegs."
Toon meer Toon minder