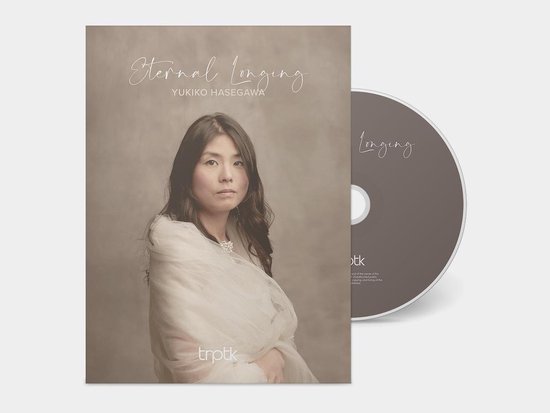 In front of you lies Eternal Longing, Yukiko Hasegawa’s debut album. The title was chosen while Yukiko was reading E.T.A. Hoffmann’s Kreisleriana. Or rather, she was struck by the term as it resonated with her on a deep level.

Yukiko explains: “Eternal Longing (‘unendliche Sehnsucht’) is the presumed longing for something sacred, something truly beautiful and deeply satisfying. A feeling which accompanies us throughout our lives and makes it impossible for people to remain happy for long. It haunts us and drives us, makes us want to get involved in beautiful artworks and go see wonderful landscapes. It searches for a deeper understanding of life and our part in the infinites of existence and time. It also is the reason why I play the piano.”

It is also the reason why Yukiko, for as long as she knows, feels attracted to certain music, certain composers that explore this feeling in deep ways, like Bach, Mozart, and the composers on this album.

Before Yukiko was able to present the works on this album, she had walked a long path starting in Hamamatsu in Japan, where she grew up. She enjoyed piano lessons from the age of four, and soon decided to follow a career in music. After high school, Yukiko continued her piano studies in Tokyo. Studying music means to be submerged in an international world characterized by a very competitive spirit, where the accent lies on rivalry and virtuosity. Yukiko says: “Often people were trying to play quicker and quicker, and sometimes also louder. For me, playing the piano was for other reasons, and at times I felt even alienated for studying piano.” It was also in Tokyo that Yukiko met her later teacher Willem Brons. Yukiko: “I remember very well that Willem Brons came to Tokyo to give lectures and masterclasses. He spoke in such a very inspired way of the deeper layers in music, that it made me want to come to the Netherlands to study with him. I auditioned and applied for a scholarship with the International Rotary Foundation, and luckily I got accepted.”

“In Amsterdam,” Yukiko continues, “I felt I had to start all over. It wasn’t easy, but I did have such a wonderful time.” She graduated for a Master of Music with the piano, and received a Bachelor’s degree in fortepiano. The latter study provided her with knowledge of authentic performance practices and a broader understanding of the repertoire of the 18th and 19th century. “And I like the sound of the fortepiano,” Yukiko explains, “Sometimes it may come across as from a dream and awakens a certain melancholy.” She laughs: “I guess I’m just a romantic soul!”

Yukiko added: “When I studied fortepiano at the Amsterdam Conservatory, we – with a group of students – went to the gallery of Chris Maene, a piano and fortepiano builder. There, I played on Chris Maene’s Walter model (a replica of a Walter fortepiano). When I heard about the Straight Strung instruments I was very excited and had no doubt that it would sound wonderful. It was a huge wish for me to play and record the repertoire of this album on that instrument, thanks to its many possibilities in sound. Thanks to YPMA-Maene Gallery Alkmaar, my dream could come true!”