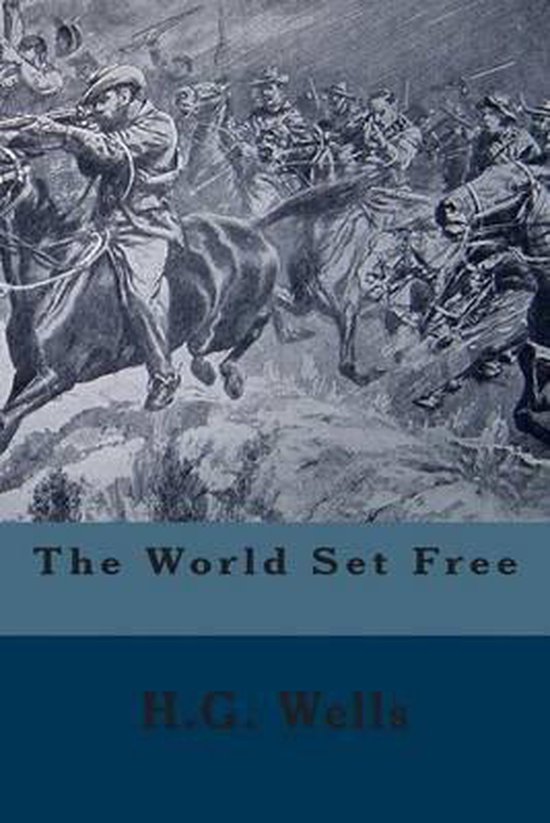 The World Set Free is a novel written in 1913 and published in 1914 by H. G. Wells. The book is based on a prediction of nuclear weapons of a more destructive and uncontrollable sort than the world has yet seen. It had appeared first in serialised form with a different ending as A Prophetic Trilogy, consisting of three books: A Trap to Catch the Sun, The Last War in the World and The World Set Free.[5]A frequent theme of Wells's work, as in his 1901 nonfiction book Anticipations, was the history of humans' mastery of power and energy through technological advance, seen as a determinant of human progress. The novel begins: ''The history of mankind is the history of the attainment of external power. Man is the tool-using, fire-making animal. . . . Always down a lengthening record, save for a set-back ever and again, he is doing more.''[6] (Many of the ideas Wells develops here found a fuller development when he wrote The Outline of History in 1918-1919.) The novel is dedicated ''To Frederick Soddy's Interpretation of Radium,'' a volume published in 1909.Scientists of the time were well aware that the slow natural radioactive decay of elements like radium continues for thousands of years, and that while the rate of energy release is negligible, the total amount released is huge. Wells used this as the basis for his story. In his fiction,The problem which was already being mooted by such scientific men as Ramsay, Rutherford, and Soddy, in the very beginning of the twentieth century, the problem of inducing radio-activity in the heavier elements and so tapping the internal energy of atoms, was solved by a wonderful combination of induction, intuition, and luck by Holsten so soon as the year 1933.[7]Wells's knowledge of atomic physics came from reading William Ramsay, Ernest Rutherford, and Frederick Soddy; the last discovered the disintegration of uranium. Soddy's book Wealth, Virtual Wealth and Debt praises The World Set Free. Wells's novel may even have influenced the development of nuclear weapons, as the physicist Leo Szilárd read the book in 1932, the same year the neutron was discovered. In 1933 Szilárd conceived the idea of neutron chain reaction, and filed for patents on it in 1934.[8]Wells's ''atomic bombs'' have no more force than ordinary high explosive and are rather primitive devices detonated by a ''bomb-thrower'' biting off ''a little celluloid stud.''[9] They consist of ''lumps of pure Carolinum'' that induce ''a blazing continual explosion'' whose half-life is seventeen days, so that it is ''never entirely exhausted,'' so that ''to this day the battle-fields and bomb fields of that frantic time in human history are sprinkled with radiant matter, and so centres of inconvenient rays.''Never before in the history of warfare had there been a continuing explosive; indeed, up to the middle of the twentieth century the only explosives known were combustibles whose explosiveness was due entirely to their instantaneousness; and these atomic bombs which science burst upon the world that night were strange even to the men who used them.[11]Wells observes:Certainly it seems now that nothing could have been more obvious to the people of the earlier twentieth century than the rapidity with which war was becoming impossible. And as certainly they did not see it. They did not see it until the atomic bombs burst in their fumbling hands [...] All through the nineteenth and twentieth centuries the amount of energy that men were able to command was continually increasing. Applied to warfare that meant that the power to inflict a blow, the power to destroy, was continually increasing [...]There was no increase whatever in the ability to escape [...]Destruction was becoming so facile that any little body of malcontents could use it [...]Before the last war began it was a matter of common knowledge that a man could carry about in a handbag an amount of latent energy sufficient to wreck half a city.
Toon meer Toon minder